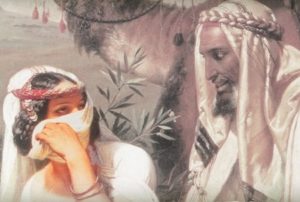 [The sixth in a series of posts responding to articles appearing on The Living Church site.]

There are very few people who are currently participating in the conversation around scripture and the amendment of the marriage canon who are not concerned with biblical authority.

What is at stake, however, is precisely how the Bible is authoritative and which texts and narrative strands we privilege in our reading of the text.

As has become evident in the last little while, the controversy around same-sex marriage and the biblical view of homosexuality has shifted away from the texts that have been traditionally appealed to in order to condemn same-sex relationships, and has become rather surprisingly focussed on marriage as a central motif in the biblical narrative and redemption history.

Some of the problems with this interpretive shift have been addressed by Christopher Brittain in his article,  “A position in search of a rationale: Symptoms of evangelical Anglican disarray on same-sex marriage,” which interacts with the most senior scholar making this argument, Ephraim Radner. Dr. David Ney, however, in his recent post “Scripture and the Mystery of Procreation,” frames his discussion of the marriage motif in the context of biblical authority, which will also frame my response.

Dr. Ney begins by suggesting that the authors of “This Holy Estate” do not want to submit to biblical authority. This is hardly plausible, since the bulk of the document is a discussion of biblical texts. Unfortunately, his subsequent arguments reveal a continued misunderstanding of both “This Holy Estate” and the biblical text itself. [For our non-Anglican readers looking over our shoulders on this debate, “This Holy Estate” was a report written for the 2016 General Synod of the Anglican Church of Canada which provided the theological and biblical rationale for changing the marriage canon of the church to include same-sex marriage.]

The first of these arguments he calls the “shellfish argument,” which he describes in terms of garbage collecting.

One divides the bible into “that which is salvageable and that which is not.” Those who read the Bible this way (he says) conclude that just as the shellfish texts are no longer relevant, so the sexual prohibitions are no longer relevant. This is a problem, Dr. Ney says, “For the Bible must be taken in whole or not at all.” He continues, “But the question is never whether such texts are relevant, but rather whether we are willing to wrestle with the words of Scripture, as they have been handed down to us and interpreted by the Church, so as to discern their particular, authoritative grasp.”

This statement suggests that the authors of “This Holy Estate” (and by extension all of us who do not think that these texts apply to 21st century same-sex marriage) are not willing to wrestle with the biblical texts.

On the contrary, not only did “This Holy Estate” wrestle with the texts to discern their historical context, many of us have wrestled with these texts and have concluded that they are relevant to the life of discipleship, just not relevant to the issue currently under discussion.

Such sexual violence in our own culture is deeply rooted in pornography, the fetishization of violence in general, the way in which the bodies of women in our world are used as items of sexual gratification, and the continual use of rape as a weapon. These are also, incidentally, some of the things which undermine healthy marriage relationships.

If we took Romans 1 authoritatively, we would be speaking out much more loudly against pornography in our midst and against sexual violence.

Why is the church not doing this? It is no secret that pornography addiction is as high in evangelical circles as it is in the wider culture. Perhaps we are not addressing these issues because it is easier to “wrestle” with texts in order to apply them to the people we disagree with rather than ourselves.

But perhaps more disturbing is Dr. Ney’s emphasis on procreative marriage as the way that God carries his divine purpose forward.

I won’t repeat the same objections to this view as Christopher Brittain did in his very fine essay on Radner’s procreation argument. Dr. Ney’s piece provides other provocative ways into the discussion.

For instance, Dr. Ney asserts that “Paul’s claim that procreative marriage is a sacrament (Eph 5.22-23) is an understanding about divine and human history in the institution of marriage.”

This is a very puzzling assertion. Paul actually says that men and women becoming one flesh is a great mystery (mystērion), and that he is applying it to Christ and the church (Eph 5.32).

What does he mean by this? He has just explained it: a husband loves and cares for his wife as he does his own body, just as Christ loves the church because we are members of his body. And how do we become members of his body? This is the mystery that Paul refers to frequently throughout the letter: the mystery of the gospel, “that through the church the wisdom of God in its rich variety might now be made known ….” (Eph 3.9-10). It is for proclaiming this mystery of the gospel that Paul is in chains (6.19).

Not only does Paul not describe marriage as a sacrament, the whole point of Ephesians is that the mystery that was hidden for ages is that the Gentiles are fellow heirs, members of the same body, and partakers of the promise in Christ Jesus through the gospel (Eph 3.4-6).

That is to say, procreation is not the way that God’s great plan is fulfilled; rather through the church the gospel is proclaimed to the Gentiles, for Christ Jesus “has abolished the law of commandments and ordinances, that he might create in himself one new humanity in place of the two, thus making peace.” (Eph 2.15).

The household that Jesus creates is not based on procreation or the blood of kinship but on the blood of the Messiah (Eph 2.13). This is a basic Christian teaching.

Of course, it would be very unusual for Paul to suggest that procreative marriage is the way that God carries forward his divine purposes (as Dr. Ney asserts).

For a Jewish man, Paul was unusually negative about marriage, giving only one reason why single people should get married: if they can’t exercise self-control they should marry so as to avoid sexual immorality.  “It is better to marry than to be aflame with passion.” (1 Cor 7.9, see also 7.36).

If Paul was so convinced that marriage was necessary for the dissemination of the gospel, why would he say in this context “I wish that all were as I myself am” and then go on to urge the unmarried to stay that way (1 Cor 7.7, 8)?

Surely if everyone were single that would severely hamper the spread of a gospel that is based on procreative marriage.

Of course, Paul can say this because he does not believe that procreative marriage is at all important for the spread of the saving good news of God in Jesus Christ.

Dr. Ney, of course, does not consider these inconvenient texts when making his argument. Instead he presses onward, asserting that “God carries forward his divine purposes for his creatures through it [procreative marriage] as well.” This assertion leaves out chunks of the story, where those who carry God’s purpose forward are not married, procreatively or otherwise. Consider Elijah, Elisha, Jeremiah, Daniel, Micah, John the Baptist, Jesus, Paul himself. (If some of these prophets were married, they didn’t seem to think it important enough to mention).

He also fails to mention that the procreative marriages that do carry the story forward bear no resemblance to marriage today, since they are not only polygamous but also involve sex with slaves.

Dr. Ney concludes this paragraph by saying, “we can see that affirming the larger scriptural narrative means affirming the particulars that comprise this narrative.”

Which particulars does he have in mind, exactly?

Women dressing up as prostitutes and seducing their fathers-in law (as does Tamar, who is explicitly mentioned in Jesus’ genealogy;  Matt 1.3, cf. Gen 38)?

Visiting prostitutes on the off-chance that one of them might save you from danger (referring to Rahab, also mentioned in Jesus’ genealogy; Matt 1.5; Josh 2)?

Or raping women that you happen to see bathing and then killing their husbands so that no one discovers that you knocked them up (Bathsheba, the “wife of Uriah” referred to in Jesus’ genealogy in such a way as to indicate David’s sin; Matt 1.6; 1 Samuel 11)?

These are the particulars of the genealogy that Dr. Ney considers to be so important. They are the only instances where the woman is mentioned by Matthew. While procreation happened in the context of marriage for some of them, it did not happen in all. And sexual intercourse happened outside of marriage for at least three of the four.

I can go on. Dr. Ney uses language about the “traditional ideals of marriage, birth and the raising of children.”

He does not define this, but I am assuming he is not referring to the biblical traditions of polygamy, sex with slaves, and finding prospective mates at a well (a common biblical theme related to marriage—see the stories of Isaac, Jacob and Moses).

Dr. Ney asserts that human life can only endure through procreative marriage, in spite of the fact that a number of countries are doing just fine with people procreating outside of marriage (I think of the Netherlands, in particular).

Let me be very clear here.

In order to make this argument for procreative marriage, Dr. Ney has had to ignore the clear witness of scripture that God’s grace is extended to all people, outside of our genealogical heritage, whether we are married or not.

And, most significantly, he has had to ignore the fact that Jesus calls into question all traditional kinship relationships. “Who is my mother, and who are my brothers?” … Whoever does the will of my Father in heaven is my brother and sister and mother” (Matt 12.48; Mk 3.31-35).

It is not up to me to discern whether Dr. Ney has begun the walk down that steady path. However, as a scholar and as a teacher, I am distressed that an article that frames a topic in terms of biblical authority chooses to ignore so much of the Bible itself.

8 Responses to “The Mysterious Authority of the Bible: A response to David Ney”