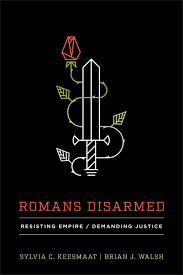 Sylvia Keesmaat’s “back to the Bible” study of the main texts that have been read to forbid all forms of homosexuality has demonstrated that these texts are not talking about anything remotely related to covenantal same-sex marriage.

But we still need to ask if there is any positive biblical wisdom to be shed on the debates around changing the marriage canon.

And I think that the best place to seek such wisdom is precisely Romans 1. If Paul does indeed have the violent and abusive sexuality of Roman imperial culture in his sights, then the question becomes:

What is Paul’s normative vision of sexuality that lies at the foundation of his critique of certain practices in Romans 1.26-27?

And does that vision of sexuality provide any support for the change in the marriage canon presently before the General Synod of the Anglican Church of Canada?

In Romans Disarmed: Resisting Empire, Demanding Justice, Sylvia and I argue that Romans 1.18-27 is actually good news proclaimed into the midst of our present debates. And, curiously enough, that good news is rooted precisely in what the apostle has to say about God and creation. While many read Paul as attacking homosexuality because it is a transgression of the gender binaries of creation order we think that this is a serious misinterpretation of the text.

Let’s look closely at what Paul says and does not say about creation.

For the wrath of God is revealed from heaven against all ungodliness and injustice of those who by their injustice suppress the truth. For what can be known about God is plain to them, because God has shown it to them. Ever since the creation of the world his eternal power and divine nature, invisible though they are, have been understood and seen through the things he has made. (1:18-20)

The emphasis here is on God, not on creation order or even the creation narratives. And the apostle keeps the emphasis on God as he continues:

“they exchanged the truth about God for a lie and worshipped and served the creature rather than the Creator …” (1:25).

Idolatry is what happens when humans who are created in the image of God refuse to image that Creator by following graven images. And such idolatry bears the bad fruit that Paul is about to describe, beginning with human sexual life but then proceeding to address vices that tear apart the fabric of social and economic life through their promotion of injustice (1:28-32).

So then, if what is being suppressed here is what we know about God from creation, then we need to ask, what does that mean?

What does Paul say can be known about God through creation, through the things that God has made? Again, let’s look at the text.

“Ever since the creation of the world his eternal power and divine nature, invisible though they are, have been understood and seen through the things he has made.” (1.20)

So, in light of where the argument is going in 1.26-27 regarding sexuality, the obvious question is: how is God’s “eternal power and divine nature” related to human sexuality?

Might it be that there is a male/female binary in the nature of God?

Not likely, and Paul certainly never makes such an argument.

Can we connect this somehow to procreation and the way in which God brings salvation to the world? Does creation reveal such a procreational dimension to the power and nature of God?

Again, not in this passage (or anywhere else in the Bible, as far as I can see).

If humans are created in the image of God, and in idolatry we not only dishonour God but dishonour ourselves by not living up to our creational calling to bear the image of God in our lives, then what is the “nature of God” that we are called to reflect?

What could Paul possibly be talking about when he so confidently says that we know both the power and nature of God because that has been clearly revealed through creation?

If we were to seek a biblical background to what Paul is getting at here we will find more fruitful literary allusions in the Psalms than in Gen. 1–3.

Doesn’t this Psalm’s reference to a voice being heard where there is no voice, of words pouring forth where there are no words, have a striking resemblance to Paul’s notion of that which is invisible being seen (Rom 1:20)? And doesn’t the psalmist confess that creation is eloquent, proclaiming the very glory of God that Paul says is exchanged in idolatry (Rom. 1:23)?

And what is that glory? What does creation reveal about the divine nature?

For the word of the Lord is upright,
and all his work is done in faithfulness.
He loves righteousness and justice,
the earth is full of the steadfast love of the Lord. (Ps. 33:4-5)

The earth is full of the covenantal love of the Creator.
Creation is saturated and overflows in that love.

The very “word” through which “the heavens were made” (Ps. 33:6), through which “all the earth … came to be … and stood firm” (Ps. 33:8,9), is an upright word, and the creation that it has wrought bears witness to the Creator’s righteousness and justice.

Indeed, the very justice of God that is revealed in the gospel (Rom. 1:16) is an echo of the justice to which all of creation is an eloquent witness.

Moreover, Psalm 98, which Paul echoes in Romans 1:16-17, describes not only the salvation, justice and truthfulness of God (Ps. 98:2-3), but also the way in which the seas and the sea creatures, the earth and the creatures who live there, the floods and the hills rejoice in God’s justice and salvation (Ps. 98:7-8).

No wonder Paul says that such a creationally revealed truth about God is repressed through injustice.

In Psalm 145 we meet one of the most common refrains in Hebrew scriptures that describe God:

The Lord is gracious and merciful,
slow to anger and abounding in steadfast love. (Ps. 145:8)

This is the divine nature: grace, mercy and overflowing in steadfast love. And in the imagination of the psalmist, this steadfast love permeates all of creation:

The Lord is good to all,
and his compassion is over all that he has made.
All your works shall give thanks to you, O Lord,
and all your faithful shall bless you. (Ps. 145:9-10)

Notice the repetition of “all”.

The Lord is good to all,
his compassion is over all that he has made,
all your works give thanks,
and all your faithful shall bless you.

Not only is all of creation saturated with the love of God, so also, the psalmist confesses, compassion goes all the way down.

As all of creation looks to Creator for “their food in due season” (145:15), the Holy One’s hands are open, “satisfying the desire of every living thing” (145:16), and that is why the psalmist sings:

“Ever since the creation of the world,” wrote Paul, God’s “eternal power and divine nature … have been revealed through the things that he made” (1:20). And it is clear from the poetry of Israel that the creation reveals the divine nature to be characterized by faithfulness, justice and covenantal love. And this, it would seem, is what humanity is blind to in our idolatry.

By rooting his lament about idolatry in the context of what creation reveals about God, Paul is not making a point about the creational normativity of heterosexuality.

Rather, he is alluding to the most foundational criteria by which imperial sexuality will be judged in 1:26-27.

Sexual lives that are steeped in infidelity, injustice and insatiable consumption are brought under judgment because they fall so short of our calling to image God in faithfulness, justice, and love.

So if Paul is not concerned with heteronormativity per se, but with the calling to image God in all of our lives, including our sexual lives, then it seems to Sylvia and I that we have a strong biblical foundation for affirming same-sex marriage.

If the fundamental calling on our sexual lives is faithfulness, justice and covenantal love, then we can responsibly affirm and encourage monogamous same sex-marriage as faithful not just to the covenantal story in which we live, but more deeply, to the very character of God as revealed for all to see in creation.

This is the good news of Romans 1.

Changing the marriage canon to encourage and bless such faithfulness, justice and covenantal love is an appropriate response to Paul’s vision of creation, sexuality, and God in this amazing text.