[A homily on Zechariah 8.1-17 presented at Wine Before Breakfast] 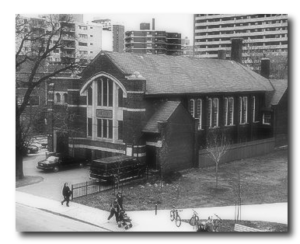 I’ve been in Toronto for a long time now, and this city has been many things to me.

It started as a crush. The city I longed to be in while I was finishing my degree in Hamilton. Then, it was my new love. Finally, I was with Sanctuary, my community, finally in a diverse city after spending so many years in lily-white London. Finally surrounded by theatres, and art, and great music and food and… <sigh>

And then, Toronto started showing me who it really is.
A city that would never be content with enough. Where property prices, constantly rising, push people into a frantic busyness and constant grasping. Work more, earn more, spend more, more more more. As we “busy” ourselves to death, we realize that there’s no true wages in this city.

And then, Toronto started showing me who it really is. A city that calls ourselves the most multicultural in the world, while having deep roots of racism. A city where Anishnawbe Health found in 2013 that the average age of death for Indigenous people was just 37 years old, a stark contrast to the life expectancy of 75 years for settlers and others. A city where black men are hassled by police, avoided by taxi drivers, and followed in shops. People have been “set against each other” in this city

And then, Toronto started showing me who it really is. As Sanctuary friends would come to see me showing bumps, bruises – once a perfectly formed boot mark across a friend’s chest -all from police and security guards, frustrated with homeless people sleeping or gathering in parking garages, bus shelters, doorways. No safety from foes, within or without.

So then, I thought I could save this city. Whatever people asked, I was up for. “Come to this protest, it will make things better,” I went. “Speak at this event. Be in this documentary. Volunteer here but not there. Vote for this person.” I was in. I was always in. And my hopes were crushed. Nothing changed. I wasn’t effective enough.

So, I became Toronto’s embittered lover. In many ways I still am. I have been so faithful to this city, but it hasn’t been faithful back. And this is the truth for many of us. We may love Toronto, we may hate it, we may love our little corners of it while trying to ignore the rest. Any way, this city remains uncaring, perhaps even hostile to our existence.

We started out in a garden.

Far from the city. Naked, unafraid and unashamed. At one with the planet, it’s creator, and each other. Whether you picture this garden literally or metaphorically, it really does seem like it would be a peaceful change, doesn’t it?

But then, we screwed up, and so we’re stuck in these awful cities until the end of time, in which everything will be back to how it was meant to be, and we’ll be back in the garden where we belong. No need to fix the city.

Actually, wait, no that’s not how it goes.

In redemption, we stay in the city. The city is where we were meant to end up. The call of humanity is to grow from shalom in a garden towards shalom in a city. William Matthews from the liturgists describes it like this, “You see, through the text, from Genesis to Revelation, the idea of a garden that eventually consumes the whole earth and [so] becomes a city.”

And God shows Zechariah a picture of what this redeemed city will look like. The elderly strong and in community. Children, playing on the streets, safe and  secure without the need for the protective or overbearing eyes of parents. Fresh food and clean water plentiful and easily accessible. A city that’s a blessing instead of a curse, inhabited by a people who are a blessing to the whole world.

I’m gonna come to Toronto, set myself up in a condo. From then on, Toronto will be known as “Toronto the faithful” in addition to “Toronto the good.” The elderly will be in community, instead of hidden away in nursing homes. Children will play on the streets, and you won’t be afraid – of kidnappers, assailants or stray bullets. Each yard and each park will have so much produce that everyone will share without anxiety, and the water will be so clean you could bathe in the Don River. This city will be a blessing to the country and to the world.

Zechariah gives the instruction “let your hands be strong” a couple of times in the passage.

A phrase used only a handful of times in the Hebrew testament, and always at times when actions requiring a combination of courage, hope and faithfulness to the call of God were needed. For example, this was the phrase David used when he acknowledged the death of Saul and announced his new reign as king of Judah.

“Let your hands be strong” is a dreadful instruction for those of us who’ve experienced the painful seeming unchangeability of the city. Actions of courage, hope and faithfulness feel exhausting, demoralizing and pointless. I have spent weeks angry at this text for it’s hopeful faithfulness. Hopeful faithfulness is vulnerable, it means opening our hearts – my heart – to the city again, and imagining that things in this broken city could actually change. It’s much easier to do justice work because it’s an expression of love to individuals, or just the right thing to do. Both of those things I can do without risking my heart on hope, since hope is hard and scary.

But the prophets have never been about what’s easy and safe.

This is the moment where change is possible. Don’t miss it because you’re afraid to hope.

And, the curmudgeon in me is disappointed to tell you that sometimes it works. Sometimes people who act out in courageous hope can change the city.

Throughout 2015, 2016 and 2017, synthetic fentanyl was pouring onto the streets. The fentanyl was inconsistently strong, so nearly impossible to use safely. Those of us who love people who use drugs spent those years nearly continually anxious and grieving. The city promised safe consumption sites, but delayed and delayed, sending the proposal from board to board, committee to committee for approval. All the while, our friends were dying.

And then, in August of 2017, the Toronto Overdose Prevention Society, including our own Megan Lowry, opened the first unsanctioned overdose prevention site in the city.  No one knew whether the authorities would look the other way or respond with force. Health professionals and activists put their licenses, their freedom at risk to save lives. And their act of faithful hope and courage sparked a tidal wave; a week later, a temporary site opened at a downtown public health office, instead of waiting for the construction of three permanent sites. Right now, just over a year later, you can walk Queen Street from Leslieville to Parkdale, and on that walk, you’ll be near seven different safer consumption sites, whether sanctioned or unsanctioned. We still don’t have enough, but the ones we have are actively saving lives. The city is a better, safer place, because of the strong hands of the volunteers with the Toronto OPS.

The courageous vulnerability of hoping in the city’s ability for change reminds me of the most famous embittered lover of our age. A couple of years ago, Beyonce dropped Lemonade, an album interweaving the rage and pain of being a black woman in America with the rage and pain of being a woman with a faithless lover. Over the last two years, she and Jay-Z have done a semi-public reckoning and reconciliation. I saw them perform this fall. They were clearly still tender, still even a little bitter, but both of them had laid out their hearts in front of each other, and most of the world. And I heard the voice of courageous hope when she sang:

You did some things to me
Boy, you do some things to me
But love is deeper than your pain
And I believe you can change.
The ups and downs are worth it
Long way to go, but we’re workin’
We’re flawed, but we’re still perfect for each other,
Sometimes, I thought we’d never see the light
We went through hell with heaven on our side
This beach ain’t always been no paradise
But nightmares only last one night

May your nightmares only last one night, and may you wake with the courage to be vulnerable enough to live out hope, in word and deed, actions and belief.

One Response to “Heartbreaking Hope and Courage”