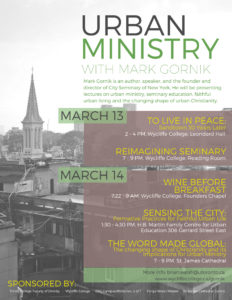 Brian Walsh has organized a series of lectures/conversations with urban missiologist Mark Gornik in Toronto. Gornik’s book To Live in Peace: Biblical Faith and the Changing Inner City was a ground-breaking moment in North American urban ministry. Arising out of his experience in the Sandtown neighbourhood of Baltimore, Gornik brought together an integrative vision of urban ministry that was breath-taking in scope. I’ve been teaching that book ever since it was published 15 years ago.

Gornik has gone on since his time in Sandtown with at least two other projects. The first was the establishment of City Seminary of New York in Harlem. This is a seminary rooted in the streets of New York and directed towards those very streets. And then, emerging out of his engagement with faith on the street, Gornik began to study and engage African Christianity in New York. Not so much African-American forms of faith, but churches of recent African immigrants was his focus. This resulted in the award-winnng book The Word Made Global: Stories of African Christianity in New York.

So, given all that Gornik has been up to, and the unique and creative contribution that he has made to urban ministry, we’ve brought Mark to Toronto on March 13 and 14 in partnership with both Wycliffe and Trinity Colleges, together with Yonge Street Mission and St. James Cathedral, to put together an exciting two days with Gornik.

If you are around Toronto, it would be great to see you. And feel free to share this information widely.

Housing for Homefulness— In this session we discuss specific models and examples of housing development for homefulness. Introduced and moderated by Andrew Stephens-Rennie (Missioner, Valhalla Parish in Anglican Diocese of Kootenay, and co-editor of A Sort of Homecoming: Essays Honoring … Continued