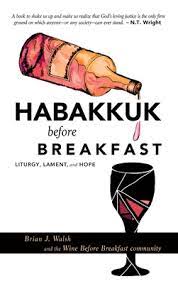 [On June 12, 2016, 49 people were murdered at the Pulse Nightclub in Orlando. This was a mass shooting fuelled by violent homophobia. Six years later the Synod of the Christian Reformed Church elevated the “traditional” view of sexuality and marriage to the level of confession. The hurt, anger and pain within the LGBTQ+ community in the CRC has been profound. When the Pulse Nightclub massacre happened, the Wine Before Breakfast community at the University of Toronto was about to launch our book, Habakkuk Before Breakfast: Liturgy, Lament and Hope. I had to change my sermon dramatically in light of what had happened in Orlando. In the shadow of the pastoral massacre that happened at the CRC synod this week, I find myself returning to that sermon. It is a hard sermon, and I do not offer it lightly, or as the final word on anything. But, in the spirit of Habakkuk, I share this with my LGBTQ+ siblings, and other allies.]

The line is from Dylan’s “All Along the Watchtower,”
but the sentiment is running through a large group
of LGBTQ+ members of the Christian Reformed Church,
and their allies.

Some way out of this toxic atmosphere.

Some way out of the violence that has (again)
been poured out on the LGBTQ+ community.

How long shall we cry out for help?

There must be some way out of here.

Scores have escaped,
while many remain, hoping against hope,
for an affirming church.

We’re surrounded by this violence,
hemmed in by this hatred
held captive by this fear.

Held captive in the Christian Reformed Church,
where today the blood splattered walls of the church cry out,
where there is weeping in the pews,
and imposed silence at Synod,
and all that is left is lament.

Woe to you who heap up the bodies of LGBTQ+ folks,
sisters and brothers,
mothers and fathers,
lovers and friends.

Woe to you who get evil gain for your house,
setting your nest on high
to be safe from the reach of harm! (Hab. 2.9)

Woe to you who build a town by bloodshed
and found a city on iniquity. (Hab. 2.12)

Woe to you who make your neighbours drink the draft of your rage,
who pour out wrath until it leaves your victims naked and bloodied. (Hab. 2.18)

Woe to you who have turned your back on love,
and live out of a fear and hatred
that will inevitably rebound on you.

Woe to you who make a god out of your theology,
who bind the scriptures as you bind your people,
who sacrifice your children on the altar of your “orthodoxy.”

The proud are beset with spiritual injustice,
but “the righteous live by faith.” (Hab. 2.4)

The arrogant will not abide,
but “the righteous live by faith.”

Wealth is treacherous, (Hab. 2.5)
but “the righteous live by faith.”

The machinations of hate and fear are powerful,
but “the righteous live by faith.”

The death-dealing violence of homophobes is insatiable,
but “the righteous live by faith.”

His body trembling,
his lips quivering,
his step faltering,
Habakkuk ends his song with this:

though the fig tree does not blossom,
and no fruit is on the vines;
though the produce of the olive fails
and the fields yield no food;
though the flock is cut off from the fold
and there is no herd in the stalls,
yet I will rejoice in the Lord;
I will exult the God of my salvation;
he makes my feet like the feet of a deer,
and makes me tread upon the heights. (Hab. 3.17-19)

Can we join Habakkuk in that song post-Synod 2022?

Have we got it in us to sing
in the face of all that would render us silent?

Though the violence continues unabated,
and there seems to be no end in sight;
though homophobia continues to slaughter
God’s beloved children;
though we are so broken-hearted,
confused and angry;
can we still proclaim,

Christ has died,
Christ is risen,
Christ will come again?

Maybe they can sing for me, too.