Interviewing someone once for a campus ministry position,
I posed two quotes,
and asked the candidate which of the two resonated
most deeply with them.

There is a crack in everything,
that’s how the light gets in

The person I was interviewing
recognized the quotes as being respectively from
Bruce Cockburn’s “Lovers in a Dangerous Time”
and Leonard Cohen’s “Anthem,”
and sat with the question for a few moments.

They acknowledged that both are true,
but pastorally they found more hope
in light shining through the cracks,
than in trying to kick our way through the darkness. 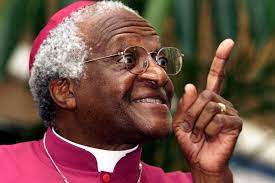 “Hope is being able to see that there is light
despite all of the darkness.”

Darkness seeks to consume the light,
and so in a time of overwhelming darkness
you need to take an aggressive stance,
kicking at that darkness,
puncturing that darkness,
until it bleeds daylight.

But the fact that darkness can bleed daylight,
assures us that there is light behind that darkness,
and so Mr. Cohen’s insight that the light
shines through the cracks. 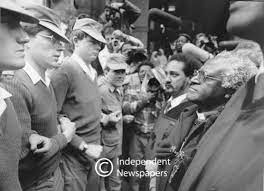 Desmond Tutu did not shrink
from the machinations
of darkness,
whether in the form of a
racist apartheid regime,
a corrupt ANC government,
oppression of Palestinians,
or LGBTQ+ persecution.

As he used to pray, 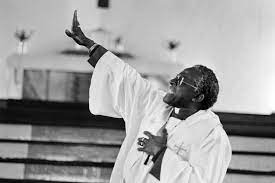 Sometimes he had to
hang on to such
faith by the skin of his teeth,
but more often than not
(at least in public),
he laughed, danced
and preached
his faith in the light
against the odds.

But this was no heroic stance.
This was the stance of faith,
rooted in humility,
radicalized by the gospel,
sustained in sacrament. 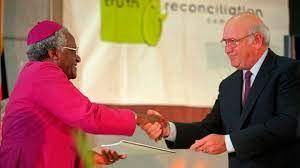 But, as far as
I can understand,
Tutu never objectified the darkness,
never allowed
the systems of darkness
to fully define its perpetrators.

Behind the walls,
behind the constructions of darkness,
in every person,
and every situation,
Tutu could see the light.

The image of God,
the abiding Presence,
the light of goodness and life,
could never be extinguished.

Darkness could never have the last word.

And so the archbishop
would be attuned to the cracks.
He would look for those places
where the machinations of darkness would stall,
where the structures of evil would begin to crack,
and there, as the light would break through,
he would place himself,
welcoming the light,
and pushing those cracks to open just a little more. 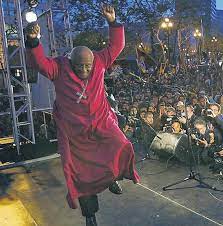 Postscript on the metaphor of darkness

While Desmond Tutu employed the binary
of light and dark in a way consistent with
biblical tradition, there is an important
voice of correction or reconsideration
that emerges from other black Christians.
I refer you to the provocative poem, “Darkness Goodness”
by the Rev. Jacqueline Daley, posted here.

2 Responses to “Desmond Tutu and the Light”