The “Cherry Tree Carol” has been around,
in one form or another,
since sometime around the 15th century.

I should have known about this carol,
since it has been recorded by numerous artists of my generation
– Joan Baez, Judy Collins, Peter, Paul and Mary, and even Jose Feliciano.

But it has evaded me.

Or perhaps I did hear the carol
– I was a big Joan Baez fan as a teenager,
how could I have not heard this song? –
but had an adverse reaction to it.

You see, the song spins an apocryphal tale
about Mary and Joseph,
and maybe I had an allergic reaction to anything apocryphal.
[Blame the restricted imagination of Protestantism.]

Whatever.
I just discovered this beautiful and evocative carol. 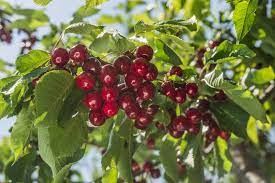 The song finds Joseph and Mary
out for a walk and coming upon a cherry tree.
Mary asks her husband to gather fruit for her,
because she is great with child.
Joseph, however, reacts in anger –
let the child’s father gather the cherry for you!

I love this honest sense of Joseph
being aggrieved at his betrothed’s pregnancy.

As with all ancient folk songs,
there are a variety ways in which the song then unfolds.

Some have Jesus speak from the womb,
commanding the tree to bow down
to provide fruit for Mary.

Others have the tree bowing down of its own accord.

Either way, the result is creation honouring Mary,
the bearer of creation’s redeemer.

In at least one of the longer versions of the song,
the story proceeds to Mary with the child Jesus on her lap,
asking about what will happen to her boy.

The stones that would greet the Messiah
on Palm Sunday,
will mourn his death on Good Friday.

The darkened sky of Good Friday
will rise to new light on Easter morning.

Or to play with the metaphors a little,
trees recognize trees.

The abundant cherry tree,
rich in fruit,
recognizes this shoot from the stump of Jesse.

As I said, this song has been around for centuries.
I have just met it through a performance by Sting
at Durham Cathedral in 2009.

I confess that I’m not much for cathedrals.
So often manifestations of gothic architecture
they tend to seem too heavenly for me.
There is a spirituality of ascent,
a focussing of the gaze upward
to this architecture
that seems to me to conflict
with the creational, this-worldly
focus of biblical hope.

Durham Cathedral, however, isn’t gothic.
The architecture is Norman.
No less grand than the later gothic style,
Durham has a sense of groundedness to it.
One doesn’t feel so much a spirituality of ascent,
as a spirituality of placedness.

Rather than a sense of flying off into the heavens,
I experienced Durham as a cathedral rooted
in its place,
which then engenders a more profound spirituality
of creational solidity and joy.

The stones of Durham proclaim resurrection,
not a Platonic vision of heaven.

While Sting’s performance at Durham
was with a full band and orchestra
(including Canada’s own,
Laila Biali on vocals!),
his rendering of “The Cherry Tree Carol”
is accompanied by the most sparse
of guitar harmonics,
allowing the tale to unfold
in profound simplicity.

Here are the lyrics to Sting’s version:

Joseph’s repentance seems to be a constant
in all versions of the song.

Not just a repentance at his harshness towards Mary,
I think,
but also a repentance before the cherry tree,
that recognized the mother of our Lord,
when Joseph did not.

For some reason,
I find this song,
and Sting’s performance,
to be healing and calming
during a time of such
brokenness and anxiety.