We all knew it was true,
but there was something so onerous,
so disgraceful,
so damning,
that few wanted to use the word.

The term had been dropped from time to time.
Usually by the victims,
seldom by the perpetrators,
never by the governing authorities.

How could we say such a thing
about our past,
about our history,
about ourselves?

Sure, we made mistakes,
but not of the depth of the Nazis!

Yes, there had been deaths,
but not with the calculated brutality of the Khmere Rouge!

We know that many children died,
but this isn’t Rwanda!

There were no concentration camps.
No incinerators.
No mass murders.
No mass graves.

But still, this was not a program
of ethnic cleansing,
or the extermination of a whole people
as if they were vermin.

Until The Truth and Reconciliation Commission.

There it was, on the very first page: 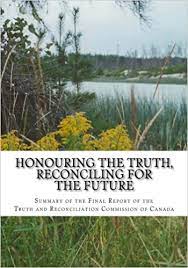 “For over a century, the central goals of Canada’s Aboriginal policy were to eliminate Aboriginal governments; ignore Aboriginal rights; terminate the Treaties; and, through a process of assimilation, cause Aboriginal peoples to cease to exist as distinct legal, social, cultural, religious, and racial entities in Canada. The establishment and operation of residential schools were a central element of this policy, which can best be described as “cultural genocide.””
(Truth and Reconciliation Commission of Canada, 2015, Honouring the Truth, Reconciling for the Future, p. 1)

But there is always a fine line
between cultural and physical genocide.

We always knew this, didn’t we.
We may have taken a strange comfort
in the term “cultural genocide.”

Yes, it was terrible.
Yes, there continues to be generational trauma.
Yes, we didn’t go looking for the truth about
how so many children didn’t come home.

Yes, we turned a blind eye to the
murdered and missing Indigenous women and girls.

But there were no mass graves.

Or at least, they hadn’t been found.

It has been six years since The Truth and Reconciliation Commission
finally named what Indigenous peoples had known
for more than a hundred years.

Colonial “Indian policy” was consistently
in service of cultural genocide.

But now we know that there is no need
for the modifier, “cultural.”

In Canada, this Thursday, September 30,
is the first National Day for Truth and Reconciliation.

There is no reconciliation without truth.
And for this first day of commemoration,
there is more devastating truth to acknowledge and mourn.

And there is no reconciliation
without repentance, remorse, and restitution.

So find a public event for this day, friends.
Stand in the solidarity of grief and guilt.
Listen to the drums and the singing.
Humble yourselves before your neighbours.
And pray for healing.

Begin your learning journey into Truth and Reconciliation here.

Andrew Stephens-Rennie has also developed another list of resources here.