[Some years ago Sylvia and I co-led a staff retreat for L’Arche Daybreak in Richmond Hill. I share the sermon from that event, slightly modified into an Advent reflection. The texts are Isaiah 9.1-4 and Matt. 4.12-25.]

One night when they were very little,
I was saying prayers with my children and the six year old prayed, \

The bad, the sad, and the miserable …
that they will be good, happy and healed.

We are often bad, sad and miserable,
and the heart of God is to make us good, happy and healed.

Isaiah understood something about God too.

In Isaiah 9, the prophet begins with this remarkable declaration:
“there will be no gloom for those who were in anguish.”

You know what anguish is, don’t you?

People who are in anguish live in gloom.

Their anguish, their sadness and despair leaves them in a very dark place.
Indeed, Isaiah calls this a deep darkness.

Have you ever been there? In a deep darkness?
Maybe you are there right now.

Isaiah has an amazing thing to say to those of us in the deep darkness.
He says that there will be no gloom for those who are in anguish.

No gloom? How could that be?

If I’m in anguish then I’m in the dark.

Well, Isaiah says that those who were in deep darkness,
those who were lost in the depths of anguish and despair,
will see a great light.

This, Isaiah insists, is God’s promise to us.

And it is at the heart of Advent longing.

A long time after Isaiah told us this promise,
a long time after his word of hope came to a people of anguish,
five men (two sets of brothers, and one father)
were fishing in the Sea of Galilee in two boats.

They had probably been out all night
and were sore and tired after all of their work.

And maybe they were talking about Isaiah because they were Jews.
Maybe one of them, let’s say Simon,
was remembering this promise.
And he’s complaining to his brother Andrew
and his friends John and James over in the other boat with their father.

There will be no gloom for those who are in anguish, eh?
Well what do you call this?
Up all night fishing in waters that used to belong to our people
but now are under the total control of those damn Romans.

Haven’t caught diddly squat,
and most of what we have caught
our Roman manager will take anyway.

What’s the point?
Why bother continue to eke out a living here
under the eye of the Romans?

And if you dare raise your head even a little
to show that you’ve still got some dignity about you,
in no time your head will be hanging low
as the rest of your body is stretched out on a cross somewhere.

No gloom for those who are in anguish?
Well I’m in anguish, and all that I can see all around me is gloom!

Sitting in the other boat,
John is concerned about his friend’s emotional state
and even more worried that,
if he keeps talking this way,
Simon might indeed end up on a Roman cross.

But he doesn’t reply.
He just sits there with the others in a sort of awkward silence.

What is there to say?
Simon is right.
Even John and James’ father has nothing to say. 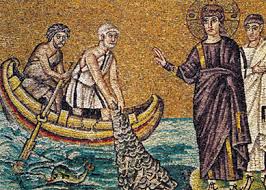 But then they saw a crowd gathering on the shore,
and there was a man speaking to them
and making a bit of a spectacle
– without any concern, it would seem,
about drawing the attention of the security forces
that were all over the place.

And as they bring their boats a little closer to shore,
they hear the man say as clear as day,
“Repent, for the kingdom of heaven has come near.”

The four young fishermen looked at each other,
shaking their heads.
“The kingdom of heaven has come near, has it?”, says Andrew.

“Yea,” replies Simon,
Here in no-where-ville Galilee,
amongst a bunch of nobodies
like us and that lot over there on the shore.

I mean, if the kingdom of heaven was really going to come near,
you’d think that the folks in Jerusalem
would be the first to know about it.
That’s where the Temple is, after all.
That’s where any self-respecting kingdom
would need to be established, don’t you think?
The kingdom in Galilee? My ass.

If the kingdom was dawning in Galilee,
then the gloom that was hanging over the land,
the gloom that darkened Simon’s vision,
was too thick to be able to see
that sun on the horizon.

But, catching his father’s eye,
John began to get a perplexed look on his face,
as if something was starting to dawn on him.

“Wait a minute, Simon,” he finally said,
that bit from Isaiah you were talking about.
Didn’t it go on to say something about the light
would shine on those who live beyond the Jordan, in Galilee?
And wasn’t Galilee under occupation when Isaiah wrote,
just like we are under occupation today? Do you think that maybe …”

But before he could continue a voice hailed them from the shore.
It was the man with the crowd.
That dangerous troublemaker proclaiming
the crazy message that the kingdom of heaven was near.
And he first called to Simon and Andrew’s boat.
“Follow me, and I’ll make you fish for people.”

And it didn’t seem to take the two brothers anytime at all
to pull up their nets and head for shore.

It was almost as if the very tone of the man’s voice,
the note of authority and loving invitation that they heard there,
had totally changed their world.

Keep fishing under Rome’s rules for dwindling fish stocks,
or participate in the coming of the kingdom of heaven,
by joining this man on the shore?

Draw fish out of the water for Roman tables
and a meagre fisherman’s existence,
or help this remarkable man to fish for people,
drawing them into the coming kingdom?

It seemed like a no-brainer,
and they immediately left their nets and followed him.

When the man called out to James and John
who were mending their nets,
their father didn’t look up.

The two young man simply got up to follow,
and the old man said nothing to discourage them.

There will be no gloom for those in anguish.

But when they left their nets to follow Jesus,
they were invited into a community of joy instead of sorrow,
a life of light instead of darkness.

It took a while before this new kingdom ever got to Jerusalem,
and even longer before it ever got to Rome.

It seems that Jesus was too busy
bringing good news to the people
far away from the centres of power
to bother about trying to convince
the most powerful people of his kingdom.

But wherever he went,
with these and other disciples following,
the sick were healed,
those afflicted with pain found relief,
those paralyzed were set free,
and the fearful received courage.

And wherever Jesus went
there would be no gloom for those in anguish
because the light of the kingdom
gave them hope.

Somehow, walking with Jesus was walking in light.

The kingdom of heaven is near, my friends.
Restoration, joy and healing is at hand.
Come and follow Jesus.