[Some years ago i wrote this short piece about the campus ministry office that our ministry inhabited in the basement of Wycliffe College. I posted it at Catapult, and you can access it here, but I’ve decided to post it anew. You see, the campus ministry staff have just announced that Wycliffe College will not be renewing the lease on that space. After a quarter century of deep, deep ministry, the CRC Campus Ministry to the University of Toronto is out in the wilderness for a period. There will, undoubtedly, be sadness in the community. This office has been a place of safety, deep conversation, prayer, and transformation. It has been “home” in profound ways to a couple generations of students. And, it has been a sacred space. That is what this story is about. The names have been changed, but the story is true.]

“Brian, Shahla would like to see where we pray.”

The request wasn’t totally out of the blue.

Quite to her own surprise, Shahla had been moved to tears
a week earlier upon hearing from her friend Janice that
this little group of Christians at the University of Toronto
had been praying for her.

An Iranian woman who had escaped the violent repression of the Iranian Revolution,
Shahla had, like so many Iranian émigrés, abandoned Islam and any other sort of religion.

Prayer was a tool of oppression and violence in Iran
and she had found a place of safety in a decidedly secular vision of life.

And yet the news that a group of Christians were praying for her had touched her deeply.

And so the request a week later. “Brian, Shahla would like to see where we pray.”

And we walked down the long hallway to the chapel
where the Wine Before Breakfast community
gathered to worship at the University of Toronto every Tuesday morning.

I don’t know if Shahla had ever been in a church before.

We walked in and she looked around, commented on how beautiful it was,
and then it was clear that she had no need to stay in that space any longer.

But before they left, I asked if they would come down to the chaplain’s office for a moment. I had something to give to Janice.

The time in the office was short and the two women went on their way. 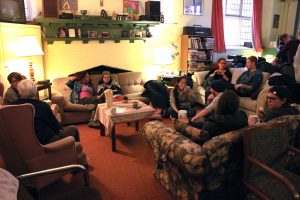 his is not your ordinary 8 × 10 professor’s office. No, this is a large space with couches and chairs, coffee makers, a fridge and enough plates, mugs and cutlery to feed a crowd.

This is a place
of deep conversation,
of learning,
of prayer, of Bible study.

An hour after they had left, Janice called.

“Brian, this is pretty amazing.
When Shahla and I left the office
she immediately told me of a dream that she had.
Shahla takes dreams very seriously
and often calls her sister in Iran to help her interpret them.”

Shahla had a dream the night before her visit to our worship space and the office.

That was really the extent of the dream.

And she did.
But it wasn’t the chapel. It was the office. 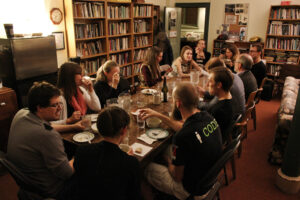 As they walked home, Shahla
told Janice that when they came into the office
she knew that this was that sacred space,
this was that place in her dream.

When I share that story with people
who have inhabited the space
of the campus ministry office over the years,
they are astonished by the dream,
but not by the sense that this office is sacred space.

Even if they have never really thought
of the office in those terms,
such language immediately resonates.

Yes, this is a place where countless folks have met God.

And maybe this is a place where for the first time
they were allowed to argue with God,
to give voice to their deepest doubts and fears.

Yes, this has been a place of profound meeting.
A moment of knowing and being known.

Yes, this is a place of memory making, storytelling,
rooted in the deepest and widest story of all.

And from this place, this sacred space,
people have gone out to reclaim all space,
all places as sacred.

Such a re-consecration of all of life
might have been born of the experience
of this office space as sacred space.

Like so many émigrés, Shahla’s most painful memories are those of violation
— the violation of body, of home, of family, of land, of a whole nation.

Violation profanes everything it touches.

May it be that her dream of a sacred space,
a space connected to Jesus,
a space she found existed in a basement at the University of Toronto,
would animate in her a hope of such reclaimed life,
such re-consecrated space, such sacred space.