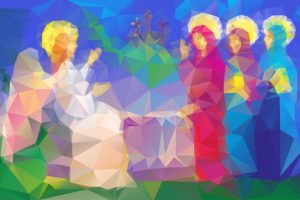 
On the first day of the week, at early dawn, they came to the tomb, taking the spices that they had prepared. They found the stone rolled away from the tomb, but when they went in, they did not find the body. While they were perplexed about this, suddenly two men in dazzling clothes stood beside them. The women were terrified and bowed their faces to the ground, but the men said to them, “Why do you look for the living among the dead? He is not here, but has risen.  Remember how he told you, while he was still in Galilee, that the Son of Man must be handed over to sinners, and be crucified, and on the third day rise again.” Then they remembered his words, and returning from the tomb, they told all this to the eleven and to all the rest. Now it was Mary Magdalene, Joanna, Mary the mother of James, and the other women with them who told this to the apostles. But these words seemed to them an idle tale, and they did not believe them. But Peter got up and ran to the tomb; stooping and looking in, he saw the linen cloths by themselves; then he went home, amazed at what had happened.

Hymn: Who Will Roll Away the Stone (By Ordinary Time)

Early in the morning, the sun already risen
Three women came bearing spices, the Lord’s body to anoint
Standing at the tomb, they asked each other saying

Looking up they realized, the stone had been removed
And to their amazement, a young man sat before them
“Do not be amazed,” he said, “for Jesus the Nazarene
He who has been crucified, here you will not find

He has risen from the grave” …

“He has risen from the dead”  (repeat)

Meditation:  It was the Women  (Sylvia Keesmaat)

It was the women
who refused to let fear
have the final word.

The women, who had provided
for Jesus and his disciples
throughout his ministry,
who had bought food
(when it wasn’t being shared
with five-thousand others),
who had prepared
that last passover
and served it while the disciples
bickered about who was great.

These women were the ones
who had followed to the cross
when the disciples fled in fear.

They were the ones who watched
as Jesus cried out his anguish,
called out for his God,
and gave up his final breath.

And now, it was the women
who refused to let fear and grief
keep them from the tasks at hand.

Even in the face of death,
they were followers of Jesus.

Even in the anguish of death,
they would minister to him.

Even in the desolation of death,
their hands would provide
a gentle touch,
a compassionate anointing of his body
in counter-point to the violence he had suffered
at the hands of the soldiers.

Which is why the women were there
with eyes to see
when the story unfolded
in an utterly new and unexpected way.

When God acts in newness and resurrection
will we be present?

Will we have eyes to see?

God of new life,
we confess the desire
to hide within our fear and grief.

Move in us that we might be
the gentle touch of compassionate love,
and so be present when you bring new life
out of the ruins of the past.

We pray this in the name of the
resurrected one,
Jesus, the firstborn from the dead.