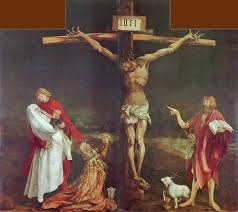 Two others also, who were criminals, were led away to be put to death with him. When they came to the place that is called The Skull, they crucified Jesus there with the criminals, one on his right and one on his left. [[ Then Jesus said, ‘Father, forgive them; for they do not know what they are doing.’]] And they cast lots to divide his clothing. And the people stood by, watching; but the leaders scoffed at him, saying, ‘He saved others; let him save himself if he is the Messiah of God, his chosen one!’ The soldiers also mocked him, coming up and offering him sour wine, and saying, ‘If you are the King of the Jews, save yourself!’ There was also an inscription over him, ‘This is the King of the Jews.’

One of the criminals who were hanged there kept deriding him and saying, ‘Are you not the Messiah? Save yourself and us!’ But the other rebuked him, saying, ‘Do you not fear God, since you are under the same sentence of condemnation? And we indeed have been condemned justly, for we are getting what we deserve for our deeds, but this man has done nothing wrong.’ Then he said, ‘Jesus, remember me when you come into your kingdom.’ He replied, ‘Truly I tell you, today you will be with me in Paradise.’

It was now about noon, and darkness came over the whole land until three in the afternoon, while the sun’s light failed; and the curtain of the temple was torn in two. Then Jesus, crying with a loud voice, said, ‘Father, into your hands I commend my spirit.’ Having said this, he breathed his last. When the centurion saw what had taken place, he praised God and said, ‘Certainly this man was innocent.’ And when all the crowds who had gathered there for this spectacle saw what had taken place, they returned home, beating their breasts. But all his acquaintances, including the women who had followed him from Galilee, stood at a distance, watching these things.

Were you there when they nailed him to the tree? …

Were you there when they pierced him in the side? …

Were you there when the sun refused to shine? …

Were you there when they laid him in the tomb? …

On that fateful day
the sun’s light failed.
Brilliant light fades as
curtain tears in two.

God-awful week in a God-damned
month of captivity, death toll
on the rise, anxiety at an
all time high.

All roads leading here,
no matter what way
we seek to deny
our vulnerability.

In the face of love’s death,
certainty stumbles;
in panicked pandemic,
song struggles for breath.

Creation’s Creator cries
with voice loud and resonant:
My life is in your hands.
Cleanse us now.

We are one, though distant.
We are beloved, yet searching.
We are stunned and stammering,
and yet we will sing.

From the depths of our being,
From lips parched and
souls sickened, we sing
until the sacred shadow breaks
and the chill goes away.

Broken one, we listen
for the sound of your voice
on the wind, in our communities,
in our hearts.

In the disorienting
depths of seclusion and silence,
we cry out aching with
the broken of this world.

We too are broken,
weary, and afraid.

Put your song
on our lips, that we might
proclaim your praise even so,
this darkened day.

There’s a shadow hanging heavy
There’s a cold chill in my bones
It’s a steep road, high and weary
It’s a long, long way from home