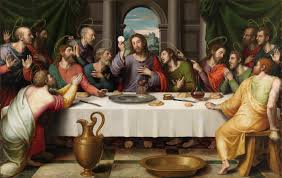 A dispute also arose among them as to which one of them was to be regarded as the greatest.

But Jesus said to them, “The kings of the Gentiles lord it over them; and those in authority over them are called benefactors. But not so with you; rather the greatest among you must become like the youngest, and the leader like one who serves.

You are those who have stood by me in my trials; and I confer on you, just as my Father has conferred on me, a kingdom, so that you may eat and drink at my table in my kingdom, and you will sit on thrones judging the twelve tribes of Israel.

Hymn: Will You Let Me Be Your Servant

I will weep when you are weeping
When you laugh, I’ll laugh with you
I will share your joy and sorrow
Till we’ve seen this journey through

Meditation:  The Pissing Match at the Family Meal (Brian Walsh)

We’ve all been there.

The family dinner that dissolves into squabbles.

Usually it is old hurts unresolved,
sibling competition that has been there forever.

Sometimes it takes the form of politics,
or religion,
or economics.

Or it is that same old pissing match
about who is best.

You know.
Things like talking about
the house,
the chalet,
the cottage,
while there is a someone at the table
struggling with mortgage payments on a modest home,
or maybe even struggling at the edge of homelessness.

Flaunting our superiority
until the whole thing erupts
into bitterness, anger, tears.

And isn’t it sadly ironic
that this stuff happens at occasions like
Easter, Thanksgiving and Christmas?

Well, maybe it isn’t that strange.

I mean, just look at what happened at the Last Supper.
It is the Passover, for crying out loud,
and a dispute arose among them
as to who is to be regarded as the greatest.

There is strife and bitter argument at the table.
The Lord’s Table, no less!

This table of liberation,
this feast of the Kingdom,
this communion in one body,
dissolves into a competition of greatness,
a dispute about who will have the best seats in the Kingdom,
a controversy about who will take pride of leadership
in the new social order.

I know.
It’s all bullshit, right?

So how come we’re still having the same argument?

Welcome home my son, it’s been so very long
I know that you’re here to surrender
The disappointing days I suffered at your age
were more than I care to remember

Before you throw the towel and turn your engines out
don’t expect to spit all that you tasted from your mouth
After all you’ve seen, the most you’ll hope to be
is pretending to be a pretender

The years that I been through, I met a gentle few
who say that they love and they mean it
The others that I met, they’re decent folks I guess
but all that they love is achievement

Their swagger and their dress, the trappings of success
the butter and the milk of what it takes to get ahead
Any given night, you’ll catch them dead to rights
painting their name on the ceiling

Remember in the end that many of your friends
would rather be dead than uncertain
They want a simple yes, or even better yet
a promise the next life is perfect

I promise that it’s not, but then what have they got
Only fifty years, they never gave a moment’s thought
Anyone they find who tells them otherwise
they’ll follow him backwards and shirtless

Welcome home my son, it’s been so very long
I know that you’re here to surrender