[A homily preached at Wine Before Breakfast on the story of the lost son, Luke 15.11-31. The service opened with U2’s “A Sort of Homecoming.”] 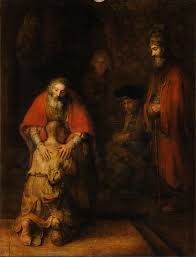 A sort of homecoming. That key qualification in the title of U2’s song has been in my head for the past week, and has become the prism through which I’ve found myself viewing the very familiar story in our scripture reading for today.

A sort of homecoming: a homecoming … of a kind. After a fashion. To an extent.

Why—why a sort of homecoming?

Asking this has gotten me thinking about this well-known story of the prodigal, his father, and his brother as a story about a sort of homecoming—a homecoming of a kind, but one that is not and, under the circumstances in which it takes place, cannot be a full, authentic, definitive homecoming.

We have all, I’m sure, had the kind of experience that I’m suggesting this story recounts: the experience of a homecoming that was, at best, partial, provisional, incomplete, lacking in some way—a sort of homecoming.

Maybe it’s because we don’t always get along with the people with whom we share our home, or they don’t always get along with us. Maybe it’s because the exigencies of our economy, the demands of our jobs, or the pressures of our lives have only permitted us to have homes that were contingent, or impermanent, or unsatisfying. Maybe it’s just because of the truth of the old cliché that you can’t go home again.

And that’s to say nothing of all those who cannot even experience a sort of homecoming—those who have no home in even a provisional or unsatisfying way.

Jesus’s story of the prodigal’s homecoming gives us an opportunity to reflect on some of these reasons why a homecoming can be, at most, only a sort of homecoming. And in so doing, the story enables us to envision, if only indirectly, what a genuine, complete homecoming might be like.

If we read this story literally, as simply a story about a father and his two sons, we can see how the younger son’s homecoming may only be a sort of homecoming, in that this homecoming, and the way the older son responds to it, ruptures the very home the younger son is returning to.

The story ends with the father pleading with his older son to set aside his anger at the unmerited preferential treatment he believes the younger son is receiving. We are not told what happens next. Is this attempt successful? Or have the collective decisions and actions of these three family members ended up doing lasting harm to the relationship between the older son and his father? Has the father regained one son only to lose the other? If the younger son’s return to the home that he broke by his selfishness has the unintended but still real effect of breaking that home anew, we might well call his homecoming only a sort of homecoming.

And then there are the marginal figures in this story: the hired hands and the slaves.

The words and actions of the two sons give us a window into the precarious lives of these marginal figures. The younger son is driven to hire himself out as an agricultural labourer by destitution and famine. How many of his father’s hired hands, while they may “have bread enough and to spare” now, were driven to the same course of action by similarly desperate circumstances?

“A Sort of Homecoming” speaks of “faces ploughed like fields”—how many of these hired hands must have such faces, furrowed by hard labor and past suffering until they are the very image of the fields they work?

The older son, for his part, says that he has “been working like a slave” for his father. No matter how hard the older son may have been working, this bit of hyperbole selfishly blurs the huge difference between his lot, as a child of privilege who will possess a guaranteed share of the property he is working on, and the lot of the actual slaves around him, who are themselves a part of that property. (This is an aspect of the story that takes on new resonance when read in the context of Black History Month.)

Turning our attention to these marginal figures in the story—who also belong to the household the younger son comes home to, but in a very different way—might prompt us to ask how much the younger son’s homecoming extends to them. The father says, “to his slaves,” “let us eat and celebrate,” and we are told that “they began to celebrate,” but the extent of those plural pronouns is unclear. Is the father speaking only of his son and himself, or are the slaves and hired hands included as well? And even if the slaves get to take part in the celebration of the younger son’s homecoming, when that celebration is over, they will presumably go on being slaves. What would homecoming look like for them? Where, if anywhere, could they be at home? What would it take for them to be genuinely at home in the household the younger son comes home to?

I’m sure that we can all find plenty of analogues, in our lives and our world, for these ways in which the prodigal’s homecoming ends up seeming limited or incomplete.

Even those of us who may feel materially at home may also feel that we have only sort of come home and may long for a deeper sense of homecoming. And all of us, by our individual actions and by our involvement in larger systems of injustice, play a part in keeping the experience of coming home and being at home out of reach for so many, ourselves included.

Indeed, if there’s one thing the story of the prodigal might help us see about ourselves today, it’s our own immense prodigality and wastefulness as a civilization: the way that we are quite literally burning through far more than our share of the rich inheritance of God’s creation.

And as U2 reminds us, such destructive prodigality causes a general homelessness that makes all homecomings only sort of homecomings:

And we live by the side of the road
On the side of a hill
As the valley explode
Dislocated, suffocated

The land grows weary of its own. The earth itself, “suffocated” by our prodigality, threatens to grow weary of us—to cease to be a home to which we can come back.

So the story of the prodigal depicts or reminds us of some of the individual behaviours and systemic forces that hinder the full experience of homecoming.

By the same token, though, the story also shows what would enable a full homecoming.

If the older brother chooses to forgive.

If the father not only includes everyone in his celebration but also uses that celebration to re-envision his relationship with the other members of his household in a form that would make the experience of homecoming available to them.

Above all, the story shows us the most basic element of homecoming in the prodigal’s key decision:
“But when he came to himself he said … ‘I will arise and go to my father.’”

The prodigal comes to himself.

And it is that internal homecoming that enables him to “arise.”

This older rendering of the prodigal’s core action always reminds me of the opening passage of Isaiah Chapter 60:
“Arise, shine; for your light has come.”

Many of us heard this passage a month ago when we celebrated Epiphany; it may be good for us to hear it again now as we look towards Lent. So to set alongside Jesus’s story of a sort of homecoming, here is Isaiah’s vision of a full homecoming:

“Arise, shine; for your light has come, and the glory of the Lord has risen upon you. For darkness shall cover the earth, and thick darkness the peoples; but the Lord will arise upon you, and his glory will appear over you … Lift up your eyes and look around; they all gather together, they come to you; your sons shall come from far away, and your daughters shall be carried on their nurses’ arms. Then you shall see and be radiant; your heart shall thrill and rejoice.”

Perhaps homecoming starts with this: with arising and shining,
with coming home to ourselves by remembering who we are
and what God has done for us and is doing for, through, and in us.

Maxwell Uphaus is a writer and editor living in Toronto. He was a university teacher of literature for five years, including three at the University of Toronto. He is a member of the Wine Before Breakfast worshipping community in Toronto.