A sermon preached in the Parish of Christ Church, Coboconk and St. James, Fenelon Falls
on December 29, 2020 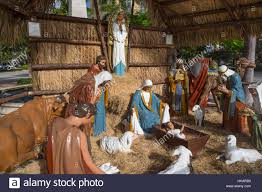 I wonder if any of you remember
the life size nativity scene
that would show up every year
on Elmtree Road.

Not the Disney character
version closer to Cambray,
but the realistic characters
in front of a farm
near Chambers Road.

It was one of the highlights of Advent and Christmas
for us and we would often take guests from the city to see it.

Every Advent the stable would be set up with an empty manger.
Some distance away you could see Joseph with Mary on a donkey.
The shepherds and wise men are also away from the stable,
and an angel is fifteen feet up a pole towering over the whole scene.

As the weeks of Advent progressed,
Mary and Joseph got closer to the stable.
And if you came by early on Christmas morning,
you would see the Holy Family in the stable,
baby Jesus in his manger,
with shepherds adoring.

The magi from the East, of course,
were still removed from the scene by some distance.
Not until Epiphany would they finally arrive.

Then the whole thing got packed up until the next year.
But what would happen if they had kept the scene up a little longer?

The shepherds would disappear off to tend their flocks.
The magi would come and go.
The angel would return to heaven.
Mary and Joseph, together with their baby,
would also be removed from the scene,
off to be refugees in Egypt.

And, if true to the story,
the whole scene would be littered
with blood soaked dolls.
Not little baby dolls, but rather, toddler size dolls.
Dead babies everywhere.
And there would be women with their hands over their faces,
keening for their children.

You see, the story goes from “Away in the Manger”
to infanticide, wailing and weeping, very quickly.

Needless to say,
my farm neighbours never erected such a scene.
If they did so,
there would have been an outcry of upset sensibilities
throughout the community.

Humans seem to have an incurable bloodthirst. 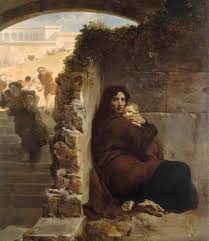 From the manger to a mass grave,
from joy to the world to inconsolable wailing,
from proclamations of peace
to cold blooded death squads,
… in a matter of days.

“O little town of Bethlehem, how still we see thee lie.”
A deathly stillness because there are no toddlers playing in the streets.

The “dreamless sleep” of the mothers of Bethlehem
erupts into their worse nightmares.

“The everlasting light,” shining in those “dark streets,”
devolves into the glint shining off of well-sharpened swords.

No hopes, just terror and “fears of all the years are met in thee tonight.”

The contrast, the tension, is almost unbearable.
If you stay away from church the Sunday after Christmas,
then let it be because you just can’t stand where this story goes.

But here’s the thing,
the church didn’t need to mark the slaughter of the innocents
so soon after Christmas.

The story doesn’t require us to face this mass murder
for at least another week.

As I just noted, all of this happens after Epiphany,
after the Magi have come with their gifts and worship,
and returned home.

That’s when Herod goes into a paranoid rage.

Tricked, indeed, mocked, by these foreigners,
and made a laughing stock of the nations,
Herod sends in his elite squad of killers,
to murder all children under the age of two.

But again, if we are going to have to face this
terrible story at some point,
why now?

Why just days after Christmas?

Why so soon after our beautiful and profound
Christmas eve services?

Why has the church, for at least 1500 years,
insisted that the Slaughter of the Innocents
be the first thing we remember after Christmas?

Well … probably because it was children.

You can’t celebrate the Christ child
without mourning the slaughtered innocents.

Did you notice that Matthew brings all the attention
to the child and the children?

Infuriated, Herod sent and killed all the children.
Rachel weeping for her children.

You see, just as the Christ child in the manger
becomes cheap sentimentality apart from
the refugee family running for their lives,
so also is the refugee child
reduced to unfair escapism
if divorced from the bodies strewn all around
Bethlehem after the Holy Family flees.

The stories we’ve been reciting over the last weeks
make it clear that the birth of Jesus happens
in the midst of power politics, mass migrations,
violent displacement, and murderous regimes.

And the church never wants us to forget this.

My friends, this is the last service of the decade.

Here we are at the end of the 2010’s.
And for me, the most striking image
that captures this decade,
the image that sums up my overwhelming
sense of what this decade might mean,
is that of three year old Alan Kurdi,
dead on the shore of Turkey.

Right there, at the mid point of the decade,
on September 2, 2015, the world bore witness
to the death of a child,
a refugee child,
fleeing from terror,
overcome by the waves.

I guess that the Lord wasn’t with Alan Kurdi that day.

The psalmist today sings,
that if the Lord had not been on our side,
then our enemies would have swallowed us up alive
as their anger was kindled against us
and we would not have escaped.

I guess that the Lord wasn’t with the children of Bethlehem that day.

My friends, we mark the Slaughter of the Innocents today
… we put “Herod back into Christmas” today …
because this isn’t a Disney story.

The evil is too powerful.
The pain is too deep.
The forces of death are too pervasive.

Nor will the mothers of the
children gunned down at mass school shootings,
or on the streets of our cities,
or who take their own lives in acts of despair …
… none of these mothers will be easily consoled.

And yet … while Matthew cuts off the Jeremiah quote
with unconsolable Rachel,
the prophet himself could see children coming home
in the midst of a mother’s despair.

Indeed, the prophet has the audacity to whisper,
“there is hope for your future.”

Confronting the devastating truth of violence,
looking horror in the face,
not averting his gaze from spilt blood,
the prophet nonetheless proclaims hope.

And just as the prophet dares to say to weeping Rachel
and the traumatized mothers of Bethlehem,
bereft of their children,

“Keep your voice from weeping,
and your eyes from tears …”

so also does the biblical story end with these words:

“See the home of God is among mortals”
… even the mortals of Bethlehem,
… even the destroyed homes of Syria,
… even the homeless and desperate refugees at the US/Mexico border
and borders around the world,
… even amongst the homeless under the bridges, in the ravines,
and languishing in our shelters …

“See the home of God is among mortals.
He will dwell with them as their God;
they will be his peoples,
and God himself will be with them.”

“He will wipe every tear from their eyes.
Death will be no more;
mourning and crying and pain will be no more,
for the first things have passed away.”

You can only wipe away tears that are already there.
It is only in the face of death,
in the face of such deep loss,
in the midst of mourning and crying and pain,
that we can really hear and embrace the good news
that the first things have passed away,
and God makes all things new.

Lord, you knew there would be violence,
but still you came.

You knew there would be grief beyond measure,
but still you came.

You knew there would be pain to tear the heart apart,
but still you came.

You came to bear the violence,
carry the grief,
and suffer the pain.

You are the One who has come,
and yet we still pray, Come soon, Lord Jesus.

Come and make your home with us,
come and wipe away all tears,
come in the face of death,
and bring new life.

2 Responses to “Slaughter of the Holy Innocents … again”