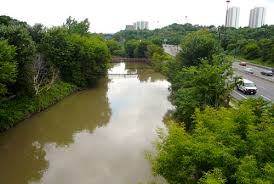 In the third year of the imperial presidency of Donald Trump,
under the religious sanction of Jerry Falwell Jr. and Franklin Graham,
while Justin Trudeau was fighting for his future as Prime Minister
of Canada,
Doug Ford was the slash and burn premier of Ontario,
his brother Rob having died in the process of dismantling the city of Toronto,
during Boris Johnson’s chaotic and illegal rule of what was once called the United Kingdom,
when Jair Bolsanaro was allowing the Amazon to burn,
Vladimir Putin was pulling puppet strings all over the world,
Saudi Arabia was murdering journalists and exterminating the people of Yemen,
the world was in the throes of a climate emergency,
and there was an alarming rise
of white racist nationalism and demagoguery …
I was riding my bike through the Don Valley trying to not think about any of this.

I’d had enough.
I heard the anger and fear of Greta Thunberg,
I had heard the wailing in the courts of the church,
and I knew that the whole damn thing was coming apart.

So I went for a bike ride.
Something that was carbon neutral.
Trying to clear my head,

Doing my best to forget the whole damn crisis,
to forget the emptiness of a political campaign,
to somehow erase it all from my mind.

As I turned a bend, I had to slam on my brakes.
The path was clogged with people.
I could see that this was some kind of protest,
or, worse still, a campaign rally. 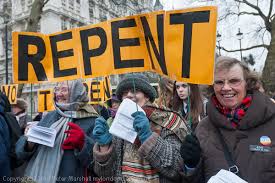 There were even placards all over the place.
But they only had one word on them.
REPENT!

Damn, if there is one thing I hate more than
political rallies it’s got to be religious freaks.

It seemed that I had stumbled upon some sort of
end of the world apocalyptic revival service.

And the best these folks could offer was REPENT?

Not very inspiring and hopeful, really.

But then I got a peek of their leader.
This dude looked like he had just crawled out of a Rosedale Valley squat.

This character pretty much fit every stereotype I’ve ever had of
one of those Old Testament prophets.

And he seemed to be riffing off of one of those prophets. 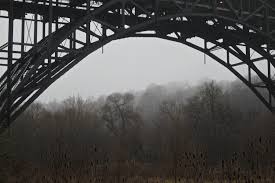 No, this wild apparition insisted …
any real word of truth was going to come from the wilderness,
from the margins,
from some squat under a bridge.

I don’t really understand all of this stuff.
I’ve not had much use for religion for a very long time,
and frankly the stuff that I’ve seen in certain religious quarters these days,
turns my stomach.

But there was something about this guy that captured my attention.
And I don’t mean just that it was a kind of weird spectacle,
with some freakish entertainment value.

No, I mean that even though this kind of talk is pretty alien to me,
there was something about this waterside preacher that rang true.

He wasn’t like the preachers in Dundas Square,
and for some reason I wanted to keep listening,
rather than riding away with a smug sense of superiority.

I think he was a Baptist.

It was clear that some folks had already got dipped in the Don,
and there was a line of more people wanting what I assume is baptism.

But then he stopped the proceedings.
In a way that would be suicidal for any politician,
and certainly any preacher,
he turned on this crowd of adoring followers
and started berating them;
calling them a brood of vipers
and questioning if they really were “children of Abraham”.

I’m sure I didn’t really get it,
but it sounded to me like he was calling them a bunch of illegitimate bastards.

He was saying that if they really wanted to get in the water,
then they had to start bearing the fruit of repentance in their lives.

You know, put their bodies, their lives, everything, on the line.
Stop talking, and definitely do not engage in this religious ritual,
if you aren’t going to live in a radically different way.

But you know, when the crowd replied,
“so what then should we do?”
that question so deeply resonated in my heart,
that, well, I almost started crying.

This was crazy.
I’m neither religious nor very emotional.
Hell, I prefer to keep myself numb
rather than feeling too deeply.

But even though I hardly understood what was going on,
I was also asking, “so what should I do?”

And this dude pulled no punches
as he answered us.

“How dare you have so many clothes,
products of sweat shops,
while you’ve got neighbours who can’t clothe themselves or their kids?

How dare you be well fed,
when so many are hungry,
and lining up at food banks?”

It seems that justice, generosity,
food security, and the redistribution of resources
is what he means by the fruit of repentance.

And then some of the well-dressed joggers,
and the folks who live up the hill in Rosedale,
and some young professionals clearly on the corporate ladder asked,
“what about us, what should we do?”

And I’m thinking, from my own position of privilege,
“yea, what are we supposed to do?”

So he replied, “Learn the meaning of ‘enough,’,
get off the upwardly mobile treadmill,
stop profiting from an economics of exploitation.

Live within your means,
and stop stealing the future from our young people.”

And then, well then, I noticed the cops.
They were kind of in the background,
but they were clearly monitoring the situation.
Some had their phones out and were filming the whole thing.

So one of the cops said, almost sheepishly,
“what about us? what should we do?”

And I’m waiting for this man from the wilderness,
this uncompromising prophet of the Don Valley,
to explode, “Go to hell, that’s what you can do!”

But he doesn’t say that.
Rather he says,

“Use your authority to protect everyone.
Not so much the property rights of the rich,
but the human rights of the poor.
Live up to your motto to serve and protect,
it is at the heart of what it means to be human.”

And the crowd was kind of quiet.
They … no, we … had never heard anything like this before.

This preacher was so hard and abrasive, yet we were inspired by hope.

And we got to wondering,
what would it be like if this Don Valley Baptist
would be our leader,
if he would lead the revolution,
if he would launch a movement of such repentance?

And almost as if he knew what we were thinking,
he got kind of quiet too,
and then said that he was only preparing the way.

Another would come who wouldn’t just get us wet in the water,
but would immerse us in what he called the Holy Spirit … and fire.

I confess I didn’t really understand what this meant,
but I found myself crying, weeping over my sin,
and longing for that Holy Spirit, even the fire.

That’s when the Don Valley Baptist walked back into the water
and invited folks to come on in and be baptized.

And, well, I followed them into the Don River,
and they all started singing and swaying and rocking to a song.