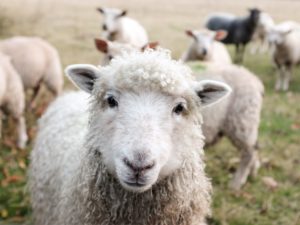 I’ve learned a lot about animal husbandry over the years at Russet House Farm.
Chickens, ducks, horses, cattle and pigs.
I’ve cared for them all.
But not sheep.
We’ve never raised sheep.
And somehow I know that if we ever
expanded to a flock of sheep,
there would be a steep learning curve.
You see, sheep are a lot of work.
You need a whole new level of fencing to keep them in.
They often need assistance when they are lambing.
They need greater vigilance to protect them from predators.
They need to be sheared at least once a year.
And they get sick and wounded with some frequency.
The day we get into sheep at Russet House Farm
is the day that we will need to significantly up our animal husbandry skills.
No wonder the Bible employs the metaphor of “shepherd”
to describe the care of humans.
We’re also a lot of work.
We get lost.
We stray!
We find ourselves alone.
We are hungry.
We are wounded!
We are weak.

We end up homeless, exiled from the flock.

And truth be known, we can be pretty stupid,
doing things that only get us into trouble.
So in the Bible, humans are likened to sheep.
But we are also called to be shepherds.
And it turns out that we are usually
worse shepherds then we are sheep.
Give us a vulnerable flock to take care of,
and more often than not we’ll exploit the flock,
ignore our responsibility to care,
fail to feed the sheep,
to bind up their wounds,
to seek the lost,
to protect the flock.
Sheep or shepherd, we aren’t very good at either.
But here’s the interesting thing.
God never seems to be angry with the sheep,
only the shepherds.
Sheep will do what sheep will do,
but shepherds have a higher calling.
It is no surprise, then, that in the end
the Holy One needs to become the Shepherd.
In Ezekiel 34, there is a powerful oracle
against the shepherds of Israel,
against the leaders of the people,
against the royal and priestly castes in Jerusalem.
Frustrated and angry at the failure of the shepherds,
the Holy One exclaims:
I will search for my sheep!
I will rescue them!
I will bring them back from exile!
I will feed them on the mountains!
I will feed them with good pasture!
I will feed on rich pasture!
I will feed them with justice
Well, someone has to.
As we enter into Advent this year,
we are sheep crying out for the shepherd.
Brian Walsh