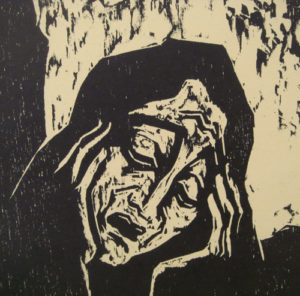 Rachel is weeping for her children

On my trip with the U of T Mississauga sociology class
to Holocaust sites and museums in Poland and Germany,
the students were divided into three research groups.

As they engaged these sites,
they were asked to do so from three perspectives:
tourism, nationalism and gender.

The tourism and nationalism groups had a lot to work with.

What was expected of the tourist in each site?
How did the tourists behave in different contexts?

(People taking selfies on the train tracks at Birkenau
was especially disturbing.)

How was nationality portrayed?

How were national identities valourized, demonized,
or lamented?
(Students noted that “Jew” and “Pole” were still divided
so that exhibits spoke of “Jews in Poland” but not
“Polish Jews.”)

But the gender group struggled.
They knew enough not to expect any kind of
descriptions that would transgress traditional binaries,
but they were surprised to find so little about women.
In the absence there is a story to be told.

The children would be taken away either for death
or for medical experimentation.

Was there wailing and keening?
Would the women have cried out as their children,
their pride, their hope,
was stripped away from them?

Or did they even know where their children were going?
As horrendous as it may sound,
it seems to me that the “lucky” ones
got to die with their children.

Any hope that is worth having,
has to be able to face such evil.

Any hope that is deeper than optimism
needs to bear witness to these children,
and perhaps wail where the mothers could not.

There is in this wailing an abrasive moment of hope.

Screaming in the face of such violence,
howling against the evil that has taken their children,
keening for their lost little ones,
women throughout the ages have
raised their voices against violence, empire and genocide.

Here is a gendered side to remembering genocide.
Here, for ancient Israel, is the female response to violence.
Rachel is weeping for her children.

And as Rachel weeped so long ago,
so also do Palestinian, Mexican, Syrian,
Indigenous, Sudanese
and so many other women continue to weep.

They wail in protest.

But somehow that isn’t enough.

And so the passage that begins with Rachel weeping (Jer. 31.15)
ends with one of the most enigmatic passages
in all of Hebrew scripture:

For the Lord has created a new thing on the earth:
a woman encompasses a man. (Jer. 31.22)

While this is notoriously difficult to interpret,
I take it to be something of a radical role reversal.

The old gender roles of male protectors and female nurturers
has failed dramatically.

The dynamism of empire,
the culture of war,
the callous egoism of violence,
have been the idolatrous fruit
of patriarchal social structures.

And it has been this way for so long,
it has been so ingrained in what we have called civilization,
that for anything to change it would have to be
nothing less than creating a new thing on the earth.

A woman encompasses a man.
A woman surrounds a man,
protects a man,
sets the boundaries around a man,
shapes the culture and ethos
in which men will live their lives.

What begins in gendered weeping
finds its resolution in gender reversals.

What begins in uncontrolled wailing
gives birth to hope for a radical new way.