[ A sermon for “Broken Hallelujahs.”  Wine Before Breakfast
leads a Leonard Cohen inspired Rock Eucharist at the
Church of the Redeemer on April 23, 2017.
The gospel was John 20.19-31.] 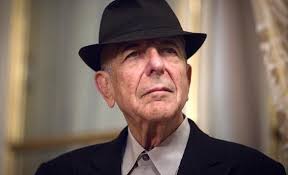 I greet you from the other side
Of sorrow and despair
With a love so vast and shattered
It will reach you everywhere.
(“Heart with no Companion,” Various Positions)

Leonard Cohen wrote those lines,
but it could have been Jesus.

In that locked room,
in that room of fear and despair,
in that space where all joy had reached its eventide,
where gladness had been banished from the earth,
where there were no more tears to be shed,
where faith had been swallowed by denial,
where hope had been violently snuffed out,
Jesus breaks in and says, “Peace be with you.”

Shalom alekem.
Peace in what remained a war zone.
Shalom for a community of betrayal.

Peace.
Not fear, not grief, not confusion, not shock.
But peace. Shalom

You see, for these disciples, their world was gone,
and there was no song on their tongues.
It had all gone terribly, terribly wrong,
and there were no Hallelujah’s to be sung,
not even a cold and broken Hallelujah.

And in that room of despair,
in that house of sorrow,
I can hear Jesus cribbing some lines from Leonard,

I greet you from the other side
Of sorrow and despair
With a love so vast and shattered
It will reach you everywhere.

That’s what “shalom alekem” means.
It was love that sent Jesus to the cross,
and it is love that raised him from the dead.

A shattered love,
a crucified love,
a love written in blood,
a love for which there is no cure.

Leonard Cohen understood shattered love.
He understood that we are all leaning out for love,
we will lean that way forever.
(“Suzanne,” The Songs of Leonard Cohen)

He knew so deeply, so profoundly, so eloquently
that every heart, every heart, to love will come,
but like a refugee.
(“Anthem,” The Future)

And here in that locked room are refugees in their own land.
A revolutionary cell for whom the revolution had failed.

They had hoped for a new exodus,
a liberation from their bondage,
a new journey home from their exile,
but the waters did not part,
the cruel and dark regime crushed their hopes,
and they remained caught in the nightmare of a dark dream.
(“Born in Chains,” Popular Songs)

Their ship was in the design stages, but had not been built.
Their hope for a new world had been stillborn.
Their hearts had been stripped of their deepest companion.
Their souls longing for a kingdom, no longer had a king.
And so, like a prima ballerina, whose very being and meaning is to dance,
they could not dance to anything.

But the one who a later tradition would call the Lord of the Dance,
the one who had danced on Good Friday to the end of love,
now dances into the midst of their mourning
and greets them from the other side
of sorrow and despair,
showing them his hands and his side.

And Leonard gets to the heart of this too, when he sings,
But then you showed me
Where you had been wounded
In every atom
Broken is the name.
(“Born in Chains,” Popular Songs)

That is the scope of this shattered love,
and that is why this is a love that can reach us everywhere.

Jesus showed them his hands and his side
and said again, “Peace be with you.”

And then he calls them anew to a vocation of shalom:
“As the Father has sent me, so I send you.”

As that Easter Sunday had begun with a woman in a garden
who had mistaken the risen Jesus for the Gardener,
so now does Jesus bring this day of new creation to its fulfillment
by breathing the breath of life into this community anew.

Holy and shining with great light,
is every living thing,
established in this world and covered with time,
until your name is praised forever.
(“Holy is your Name, Book of Mercy)

Every atom.
Every living thing.

And the holy dove, she was moving too,
And every single breath we drew was Hallelujah.
(“Hallelujah,” Stranger Music)

What was it that Leonard sang?

The birds they sang
at the break of day.|
“Start again”
I heard them say.
Don’t dwell on what
has passed away
or what is yet to be.
(“Anthem,” The Future)

Start again.
We are on the other side of sorrow and despair.

Start again.
There is a new world to be born.

Start again.
The Spirit is animating a new creation.

But there is more.

Yes, the resurrection community is called anew to kingdom ministry.
Yes, the Spirit is breathed into them as the new creation.

And again, this is not new to Leonard.
Doesn’t he pray:

Not knowing where to turn,
I turn to you.

Having lost my way,
I make my way to you.

Having soiled my heart,
I lift my heart to you.

Having wasted my days,
I bring the heap to you.

Blessed are you,
who brings chains out of darkness.
(“Not knowing where to go,” Book of Mercy)

And doesn’t he confess,

There is no setting the prisoners free,
if there is no pardon.

There is no redeeming of our lives,
our failures,
our misplaced longings,
our deep, deep brokenness,
without forgiveness.

So get busy with forgiveness, says Jesus.
And to make sure that they knew just how high the stakes were,
Jesus says that if you don’t engage in this ministry of forgiveness,
then folks won’t be forgiven.

Oh no. Leonard has this one right when he prays,

Holy is that which is unredeemed,
covered with your patience.
(“Holy is your Name,” Book of Mercy)

What Jesus is saying is that if forgiveness is withheld,
then the church is binding that which God wants to set free,
and this would be to grieve the Holy Spirit,
this would be to fall back into slavery all over again.

It was quite the meeting with Jesus, that Easter Sunday evening.

Shalom restored.
A renewed vocation in the Kingdom.
Nothing less than the birth of the new creation.
And a calling to be ministers of reconciliation,
a healing priesthood of forgiveness.

Too bad that Thomas missed the whole thing.
Thomas wasn’t there, and, for that matter, neither was Leonard.

For Thomas, it was all too good to be true.

He heard his friends talk with dumbstruck amazement
about Jesus appearing to them in that house,
even though the doors were locked.

He had heard their tale of resurrection
and nothing less than new creation.
He listened as they told him about Jesus breathing on them
as the Creator had breathed on that first human at the dawn of time.
He paid attention as they talked about being sent as missionaries
of this new creation.
And he may even have wanted to believe it all.
But it was too good to be true.

All of this may well have been the fulfillment of his deepest longings,
but when you have lived with disappointment for generations,
when you saw it all come crashing down
with a hammer and a spear just days earlier,
when you had seen with your own eyes the death of your greatest hope,
well, it is going to take more than words to turn things around for you.

And again, Leonard would have understood
this preoccupation with the body.

I want to see you naked
in your body and  your thoughts.
(“Ain’t no cure for love,” I’m Your Man)

Yes, Leonard, the quintessential lady’s man,
was totally over the top when it came to the naked body.

And Leonard isn’t that far from Thomas on this either.
You see, all love songs inhabit the house of longing.
All love songs, if they have any depth, are howling for God.

So when Leonard sings,
to a lilting 50’s pop tune,
won’t you let me see … your naked body
there is more going on here than sexual desire.

Didn’t Moses ask to see the body of God?
And wasn’t that what Thomas was asking for as well?

When the object of the artist’s desire replies,
“You’ve got one minute left to fall in love …”
Leonard confesses,

The song ends in faith,
not in sight.
The artist never does see this naked body.

Thomas, however, sees,
and then he believes.

And then, with you, me and Leonard all within earshot,
Jesus tells Thomas,
“Blessed are those who have not seen
and yet have come to believe.”

That’s what Jesus calls us to on the second Sunday of Easter.
And wasn’t that the invitation in the second verse
of Leonard’s first hit, “Suzanne”?

Singing about Jesus, we hear:

But he himself was broken
Long before the sky would open
Forsaken, almost human
He sank beneath your wisdom like a stone

“You think maybe you’ll trust him” Leonard sang in 1965,
but in later live performances he changed the words to
“and you know that you will trust him….”

Leonard always moved in the space of knowing and unknowing,
traversing back and forth between trust and “maybe,”
living in the tension of faith and doubt.

Any final resolution of this tension
would have been the end of Leonard’s art.

Settling in either knowing or unknowing,
resolving the tension of faith and doubt
would have been cheap and superficial,
regardless of where one landed.

So, to the end, to the very end,
the tension remained.

It’s the last album,
Leonard is nearing the end,
and the ambivalence remains.

But this is not the smug doubt
of someone who claims to have seen the light.

And so he sings,

I better hold my tongue
I better take my place
Lift this glass of blood
Try to say the grace
(“Seemed the Better way,” You Want it Darker)

Those who are smug in their doubt
never hold their tongue.
But Leonard stands before the mystery in humility.

And so he sings of lifting the glass of blood,
raising the chalice of the wounded one,
and trying to say the grace.

Trying.
Still not sure.
Without certainty.

Maybe that is you.
Maybe that is me.
Blessed are those who believe without seeing.
So come, dear friends, come to the table.

The invitation is from Jesus,
but tonight we hear it with the gift of a golden voice.

One Response to “Resurrection, Jesus and Leonard”