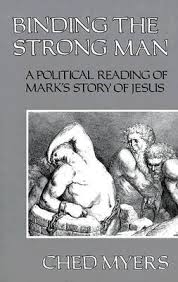 That was the refrain from the same student over and over again.

“Well,” I would reply, “it would appear that not only can you do that, but this author in fact has done that.”

“But it isn’t allowed. That isn’t the way that you can responsibly study this text,” she would reply.

“The guild, the discipline, my professors in biblical studies.”

It was the late 80’s and I was leading a graduate seminar reading Ched Myers’ groundbreaking book Binding the Strong Man and this student simply couldn’t believe the audacity of this author in writing such a book.

Truth be known, I thought that this student actually wanted to break out of the mold of biblical criticism that was the paradigm of the day. She wanted to engage this text as a living word, a word that spoke to all of life, maybe even a liberating word. But she was in a PhD program at a major theological consortium and it was clear to her that she had to learn the rules of the discipline and follow them.

She was bound by a paradigm and Ched Myers was willfully, maybe even gleefully, not playing by the rules.

Maybe we could say that she was bound by a strong man called ‘historical criticism’ and the possibility that Ched’s reading of the gospel of Mark could open a way to bind that very strong man, to disarm that constrictive paradigm, and set her free from the hegemony of the guild of biblical studies was simply too frightening.

I mean, if she took seriously what Ched was up to in Binding the Strong Man she would have found herself in a conflict with her advisors that would have been professional suicide.

Of course she also would have been ahead of the game in biblical studies by around ten years.

That is one of the delightful ironies of Binding the Strong Man.

What was Ched doing in that book that was so paradigm shattering?

He was setting the gospel in the context of conflicting symbolic frameworks. Nothing controversial about that anymore.

He was engaging in rhetorical criticism. These days, who isn’t?

He was reading Mark in the context of empire. Well, of course.

Ched was ahead of the curve on all of this. And maybe the fact that he was an ‘uncredentialed practitioner’ of the discipline, and had no concerns about imperial awards like ‘tenure’ and ‘refereed publications’ liberated him in such a way that he didn’t need to obey the strong men who controlled the discipline. The gender exclusive term is intentional.

He was doing symbolic, rhetorical and empire criticism long before these became more common in the field.

But you know, there was another reason why my student kept saying, “You just can’t do that.” There was something else going on in Binding the Strong Man that this student said you couldn’t do. You can’t do responsible historical scholarship if you kept on asking the text to speak into a context separated by two thousand years of historical distance.

Another shibboleth. Another deadly convention. Another bit of scholarly pretence.

All set up to keep the text distant at best, silent at worse.

Ched refused to leave the text in the first century.

He insisted that it would bear fruit in our lives at the end of modernity or there was no point in taking the effort to read it so closely.

He demanded that we see the strong man in the form of colonialism,
corporate greed, state violence, racism and sexism.
This is the only way to honor this text and to read it with integrity.

And he called us to wrestle with Mark,
and through Mark to wrestle with Jesus,
until we were limping from the struggle, until we were set free.
Readings under the presumption of objective neutrality necessarily did violence to the text and indeed continued the imperial violence against the one to whom this text bears witness.

That means that he was an audacious, in-your-face-with-nothing-to-lose punk in his early 30’s when he wrote Binding the Strong Man

He still is an audacious, in-your-face-with-nothing-to-lose punk.

And he’s still ten years ahead of the guild.

That’s why I love him.

7 Responses to “Ched Myers: 60 years old and still ahead of the game”