On April 6, 2014, the Wine Before Breakfast community teamed up with our friends at the Church of the Redeemer in Toronto for a service that brought the artistry of Ani DiFranco into dialogue with the story of the raising of Lazarus, with Psalm 130 in the background. You can see the liturgy of that service here. This is the sermon from that service. 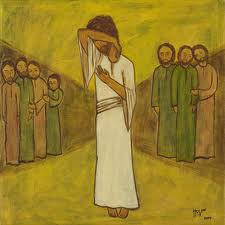 I wonder if they had been praying Psalm 130.

In those days of their brother’s illness,
and now in their wailing and grief, sitting with death,
I wonder if they had been praying Psalm 130.

Out of the depths I cry to you, O Lord.
Lord, hear my voice!
Let your ears be attentive
to the voice of my supplication.

So that is why I am cry out to you,
are  you listening, God?

Can you hear my voice,
breaking in despair,
raw from my wailing?

Was that Mary’s prayer?

Had she worn out the elbows and knees of her clothing,
in her desperate prayer through those endless nights?
Did she find herself alone with the darkness,
with no sense of light at the end of that tunnel?

Undoubtedly, they had slept from time to time.
Undoubtedly, their grief and worry would exhaust them
and they would slip into a restless and fretful sleep.

Did they have that dream,
when you open your mouth
and try to scream,
but can’t make a sound?

Did that dream become more and more intense,
until finally it became the living nightmare
in which Lazarus was dead,
and the screams then came out, piercing the night?

Like the psalmist crying out from the depths,
like Israel longing for a homecoming from exile,
Martha and Mary do not get a timely response to their prayer.

When Jesus finally shows up, its too late.

And isn’t that the way things usually are?

Isn’t that why the artist sings,
I don’t think that I am strong enough
to do this much longer
god I wish was stronger
this song could never be long enough
to express every longing …?

Don’t you find that you just get worn out?
Unfulfilled longing is so exhausting,
stripping you of all hope,
leaving you gasping for breath.

And Jesus waits until it is too late.
Even though he loved Martha, Mary and Lazarus,
even though this was a family with whom Jesus shared deep intimacy,
he deliberately tarried in coming,
he deliberately made them wait in the depths of their long night
until it was too late.

Martha hears that Jesus is coming,
and she stumbles down that driveway of desire
with both anger and a very thin and faint hope.
“If you had been here, my brother would not have died…”
she reproaches Jesus,
“… but even now I know that God will give you whatever you ask of him,”
she adds.

Let’s be clear, Martha isn’t holding out much hope.
Lazarus is dead,
you could have prevented this, if you had come in time,
but maybe, just maybe, a prayer from you will help the situation.

Jesus offers her much more than she can hope or imagine.
“Your brother will rise again.”
You see, death is not the end of the story for Lazarus,
resurrection is on offer.

Do you believe in resurrection, Martha?

Of course she believes in resurrection.

Of course she believes that this Valley of Dry Bones
that is Israel oppressed under one damn empire after an other,
will one day experience resurrection.

Of course she believes in resurrection,
this deepest and most radical dream of Israel,
a dream of darkness dead and gone,
a dream of return from exile,
a dream of a people restored, an enemy defeated,
a dream of land returned, and life flourishing again,
a dream of justice.

Do you believe in resurrection, Martha?
“Yes, Lord, I believe that my brother will rise again on the last day.”

“I am the resurrection and the life.
Those who believe in me, even though they die, will live,
and everyone who lives and believes in me will never die.”

How about that, Martha? Do you believe that I am the resurrection and the life?

“Not only do I believe that,” says Martha,
“I believe that you are the Messiah,
the Son of God, the one coming into the world.”

“I get it,” Martha seems to be saying.
“And I’m totally on board.
You are the Messiah, in you there is resurrection,
in you our exile comes to an end,

in you the captives are set free,
in you the chains of our oppression are broken.

I get all of that, and I confess that you are nothing less than the Messiah,
and that in the end days, you will fulfill all the promises.

And I believe all of that even as I stand in my grief,
even as the warmth of my brother’s touch is still a living memory,
even as my brother is rotting in his tomb.

I believe all of that,
and yet … and yet … you still didn’t come on time,
and it would appear that you are too late to be of any good to Lazarus,
who I loved and who you loved.”

You see, while Martha’s confession of Jesus as the Messiah
is rivaled only by that of Peter in the other gospels,
it is pretty clear that she doesn’t quite believe

that resurrection and life can really break through today,
a short distance from the tomb of her brother.

So she gives up on the conversation and summons her sister, Mary.

But Mary has no theological conversation with Jesus.

Mary has no time for talk about resurrection and life.
And she is not about to let Jesus off the hook
with pious talk of what he could possibly accomplish through prayer.

With Martha, he might talk theology.
With Mary, all he could do is weep.

You see, before Jesus, Mary is singing through her tears:
don’t tell me it’s gonna be alright,
don’t sell me on your optimism tonight.
I am way past such optimism, such quiet hope.

And this tears Jesus apart.
Stripped of his eloquence,
Deeply disturbed, anger welling up within him,
Jesus did the only thing that he could do.

He asked to see where they had laid Lazarus.
And when he got to the tomb,
he fell apart all over again.

Then he said, “Move the stone.”
Take away the stone that has entombed my friend Lazarus.
Take that damn stone away.

Why?
What purpose could this serve?

Was he going to go in there and defile himself by doing so?

So Martha intervenes,
“Lord, he’s been there four days, the stench will be unbearable.”
Do you believe in resurrection, Martha?
“Well yes, but not today, not here, not now.”

“Martha,” Jesus answers, “today is the day of glory.”
“Today the resurrection begins,
today God comes home,
today our exile is over,
today God is made present, even at the tomb of Lazarus.”

And then, again welling up with emotion,
angry at the power of death,
impatient with any more waiting for resurrection,
refusing to leave Lazarus, or Martha, or Mary, alone in the darkness,
insisting that today they would emerge
on the other side of sorrow,
on the other side of rage,

Jesus shouted out,
“LAZARUS! COME OUT!”

And out came the dead man,
stumbling over himself,

hands, feet and face wrapped in strips of cloth,
and Jesus said,
“Unbind him, and let him go.”

Unbind him, and let him go.
Isn’t that what resurrection is all about?

Setting us free from the shackles of death?
Unbinding the yoke of oppression?
Shaking off all that would keep us in the grip of a culture of death?

Unbind him, and let him go.
Anyone here feeling bound,
all tied up – within yourself, or within the systems of death?

I don’t know, is this a glory moment?
Is this a resurrection time?
Do you need to hear someone shout out your name?
Tian, come out!
David, come out!
Ruth, come out!
Jess, come out!

Come out and be set free.
Come out, throw your heads back and laugh until you cry.

With Martha and Mary, once your shaking subsides,
let your mourning be turned into dancing,
let your tears of sorrow give way to joy.

I am the resurrection and the life.
Come out.

2 Responses to “Lazarus, Ani and Jesus”