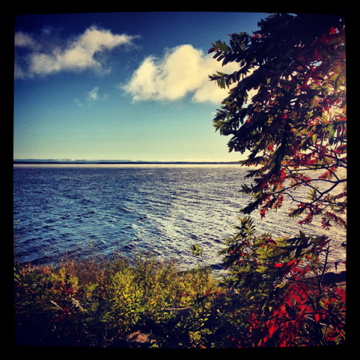 So what could this look like? What would church look like if we Canadians weren’t so captivated by what’s going on south of the border? What kind of church might we imagine if our minds weren’t so colonized by the US of A?

One of my biggest wrestlings lately is simply this: What might it mean to become a church indigenous to this time and this place – a church that is truly native to its context?

The reality is that such a church could probably never escape from its colonial history. But perhaps, if we were serious, we would find ways of being church that are native to this land. This land. Not someone else’s.

There will be much to lament. There might also be something to celebrate. But it’s tricky. I’m not sure I’ve even begun to imagine or explore how tricky such a thing might be. But then, if it’s about the gospel of Christ, it’s a very tricky thing, what with all of the letting go of your own power and putting others before yourself business.

As I type these words, I recognise how loaded they are. Indigenous. Native. It’s almost as though the Creator is trying to say something to me. And I don’t quite understand what ground I’m treading on. But I have this hunch that God is telling me, telling all of us: no matter where you are standing, you’re standing on holy ground. So listen! Listen to what it, and its people have to say.

This whole exploration is loaded. And it’s loaded because part of the answer (which is a struggle in itself) is the need to subvert our own colonizing impulses. For those of us in Canada, and especially Canada’s Pacific Coast, this especially means paying attention to and listening to its First Peoples – those who actually are Indigenous to this land. Because there is wisdom to gain. We colonisers have so much to learn if we are ever to embody the essence of God’s shalom amongst all my relations.

Maybe those of us in the colonial church, and those of us descended from colonizers could do some listening. Maybe, just maybe, we could shut up for awhile, listen and learn. We may have started with events like the Truth and Reconciliation Commission, but until listening and reflection becomes part of the church’s regular practice, we have such a long way to go.

And so I tread cautiously, not knowing what I’m saying. Not quite knowing what I’m asking. Because the way forward is about more than cultural appropriation. It requires listening. It requires meeting one another. Coming to understand each other. And trying to figure out together, what a church indigenous to this time and place might actually look like.

The truth is, I need teachers. I need to listen more deeply to the groaning of creation, and the groaning of God’s people who know this place far more intimately than I do. I also need to read the scriptures with new eyes. Eyes that are looking at the ways God has acted in the past, and that God acts here. Eyes that are opened by the ways in which others see the work of God here.

Because it will do me no good to say

“Paul’ missionary journey looked like X, so that’s what the church must do here.”

Nor will it do me any good to say

“Some American Pastor did something awesome over there, so that’s what we must do here.”

It’s not like that. Hopefully what they did made as much sense as they could make out of their own context. But I fear we misread ours. Or perhaps we hope that Toronto is NYC and Vancouver is Seattle, and so on. It would make things easier.

But they’re not. A Seattle-based megachurch pastor has as much to say to the church in Vancouver as I have to say to the Maasai. With no relationship. With no understanding of what’s going on here, neither of us have anything useful to say.

2 Responses to “Becoming an Indigenous Church”