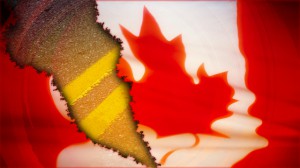 The context was the Cornerstone Festival in Illinois around ten years ago. I had been leading a series of four workshops on reading the epistle to the Colossians in its ancient and contemporary imperial context. Essentially I was taking material that would be in Colossians Remixed out for a test run. And I guess that all of this anti-imperial talk was starting to get to some of the folks in attendance, and the explicit critique of American empire was starting to make things in that festival tent even hotter than the bright sun above was providing.

Hence the question, with just a tone of frustration and perhaps incredulity.

“Do you think that there is any biblical warrant for nationalism?”

My friend Grant LeMarquand (who is now the Anglican bishop for the Horn of Africa) was in that tent and he glanced at me with a bit of a wry smile as he watched to see how I would respond to this questioner. Of course the right answer, the gentle answer, maybe even the more pastoral answer would have been to say that yes, there is some biblical warrant for nationalism. There is some legitimacy in the love of nation, in the pride of nation and in the defense of nation.

The problem is that I couldn’t see any biblical warrant for such love, for such nationalism.

And so I replied, “No. There is no biblical warrant for nationalism. We are not first and foremost citizens of nations and we owe no fundamental allegiance to nation because we are citizens of the Kingdom of God.”

My questioner did not shake his head in disgust at this crazy idea. He did not stand up and start shouting at me (that does happen from time to time). Rather, he just looked kind of sad. Maybe confused. Definitely concerned.

I mean, he had said the “Pledge of Allegiance” throughout his education as a child. He had been raised with the view that he lived in the land of the free and the home of the brave. He had been socialized from birth into the belief that America was a powerful force of good in the world. At home, in school, and yes, probably in church.

Now I could have said that there is some beautiful imagery of the nations bringing their wealth into the New Jerusalem, and that this is a way in which the Bible affirms the distinctive contribution of different nations. But the fact that the nations bring their wealth into the New Jerusalem is itself an indication that their own sovereignty is surrendered before the throne of God. And that doesn’t really jive all that well with nationalism, does it? Add into the mix that the prophets are full of oracles against the nations, then really the ‘nations’ don’t fare all that well in the biblical witness.

Wrong. In fact it is precisely when Israel starts believing in its own exceptionalism, when it takes the covenant to mean that they have some sort of privileged place in the world, including a moral superiority, that God’s judgement ends up coming down so hard on them. When the chosen people forget that they are a servant people to be a blessing to the nations, they end up in exile. And their highest civilizational achievements of the Temple and the Monarchy – those symbols of cultural superiority – are destroyed.

So if there is no biblical warrant for nationalism, then what are Christians to make of national celebrations like Canada Day (today) or the 4th of July? Should we sing the national anthem in church? Should we join in the nationalist celebrations and allow that sense of national pride to swell up in our breasts? Should we smile and nod when the Prime Minister or the President assures us that we live in the best nation on earth (somehow allowing that the other guy is saying the same thing and they can’t both be right!)?

I don’t think so. Back in Colossians Remixed Sylvia Keesmaat and I called (in the tradition of Wendell Berry) for an ethics of secession. There are all kinds of ways in which we need to secede from the empire, and refraining from nationalist celebrations would be one of them. You see, not only does nationalism have no biblical merit, any doctrine of ‘exceptionalism’ – whether American, Canadian, Israeli or any other sort – is a decidedly demonic doctrine that will always bear the bad fruit of violence.

And while we’re at it, I’d suggest another day that Christians celebrate as their national birthday. Let’s call it Pentecost.