I’ve been thinking of writing a mock newspaper article with the title, “Jason Kenney Rejects Jesus.” Of course, that would be a title only for its shock value, and that would be a shock value only amongst folks who think that rejecting Jesus would be a bad thing. And, of course, I wouldn’t really be presuming to say anything about how Canada’s Minister of Citizenship, Immigration and Multiculturalism actually has or doesn’t have a relationship with Jesus. I know that Minister Kenney was raised and educated as a Roman Catholic, and frankly, his “personal relationship with Jesus” is nothing that I should be commenting on.

But … I have been wondering, during this season of Epiphany, about how good the prospects would have been for the Holy Family if they were running away from an oppressive and murderous regime today and looking for refuge in Canada. I mean, if Joseph and Mary were Roma from Eastern Europe and they were fleeing persecution with their special little boy, then we know that under the new policies of Bill C-31, they would be denied the protection of Canada.

A lot of folks are concerned about this closing down of our borders, this denial of hospitality, this attack on justice.

And so something called the Canadian Sanctuary Network has emerged to revisit that old practice of using sacred spaces as sites of sanctuary. It’s an odd thing, really. You see, the practice of maintaining the sanctity of church buildings so that the State will not enter those spaces harkens back to the days of Christendom. And while we are decidedly in a post-Christendom era, there is, nonetheless, the vestiges of a tradition that maintains the sense that refuge in a sacred space needs to be respected by the State. 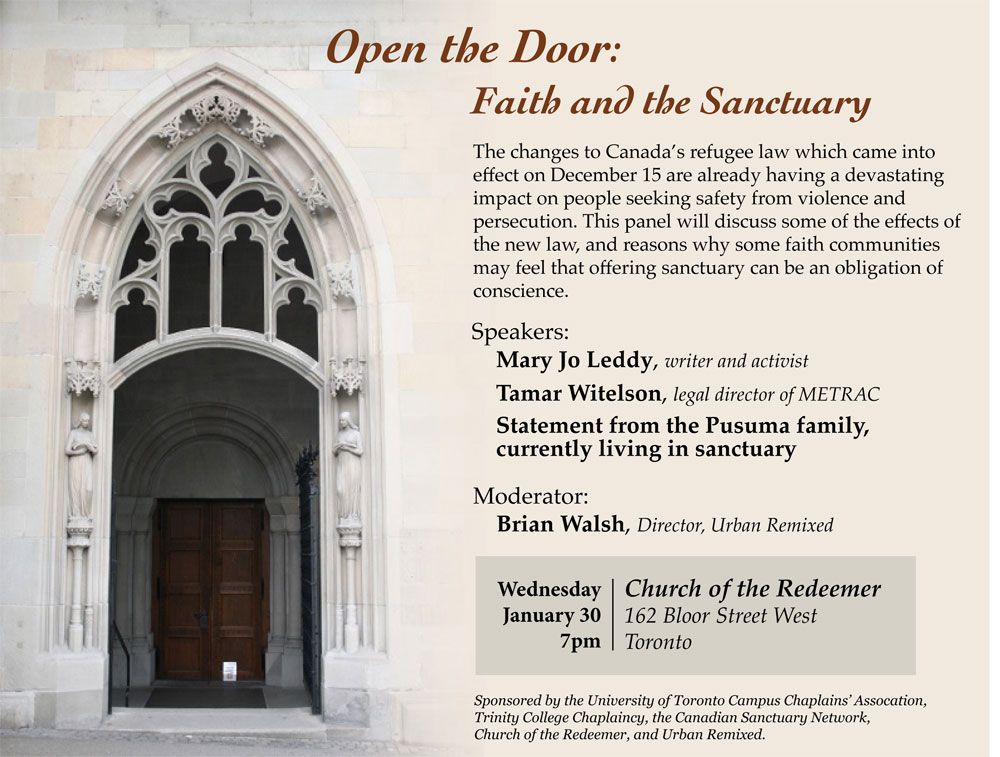 The  practice of “sanctuary” – that is, the providing of refuge to refugee in a church building so that they cannot be forcibly removed from our country – is an emergency tactic in the cause of justice. And we are in an emergency situation.

So, a sister to Empire Remixed, the Toronto-based educational ministry, Urban Remixed, is joining forces with the Canadian Sanctuary Network, together with the Chaplaincy at Trinity College, the U of T Campus Chaplain’s Association and the Church of the Redeemer to host an educational evening on opening the doors of the churches, synagogues, mosques and temples to such ministries of sanctuary. I’ll be moderating the discussion.

Open the Door: Faith and the Sanctuary
Church of the Redeemer, 162 Bloor West, Toronto
with Mary Jo Leddy and Tamar Witelson and contributions from a family in sanctuary
Wednesday, January 30 @ 7.00pm

One Response to “Sanctuary, Jason Kenney and Jesus”