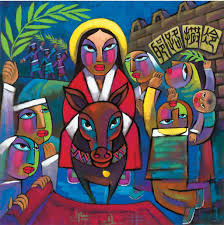 When he had come near Bethphage and Bethany, at the place called the Mount of Olives, he sent two of the disciples, saying, “Go into the village ahead of you, and as you enter it you will find tied there a colt that has never been ridden. Untie it and bring it here. If anyone asks you, ‘Why are you untying it?’ just say this, ‘The Lord needs it.’”  So those who were sent departed and found it as he had told them. As they were untying the colt, its owners asked them, “Why are you untying the colt?”  They said, “The Lord needs it.” Then they brought it to Jesus; and after throwing their cloaks on the colt, they set Jesus on it.

As he rode along, people kept spreading their cloaks on the road.  As he was now approaching the path down from the Mount of Olives, the whole multitude of the disciples began to praise God joyfully with a loud voice for all the deeds of power that they had seen,  saying,

“Blessed is the king
who comes in the name of the Lord!

Peace in heaven,
and glory in the highest heaven!”

Some of the Pharisees in the crowd said to him, “Teacher, order your disciples to stop.”

He answered, “I tell you, if these were silent, the stones would shout out.”

Hymn: Hail to the Lord’s Anointed

Hail to the Lord’s anointed, great David’s greater son
Hail, in the time appointed, his reign on Earth begun
He comes to break oppression, to set the captive free
To take away transgression and rule in equity

He shall come down like showers upon the fruitful Earth
And love, joy, hope, like flowers, spring in his path to birth
Before him on the mountain shall peace, the harold, go
And righteousness in fountains from hill to valley flow

Kings shall fall down before him, and gold and incense bring
All nations shall adore him, his praise all people sing
To him shall prayer unceasing and daily vows ascend
His kingdom still increasing, a kingdom without end

O’er every foe victorious, he on his throne shall rest
From age to age more glorious, all blessing and all blest
The tide of time shall never his covenant remove
His name shall stand forever, that name to us is Love

Meditation: The Testimony of the Stones (Brian Walsh)

“I tell you, if these were silent, the stones would shout out.”

There is something going on here that can not be repressed.
The Messianic enthusiasm on the road cannot be confined
to the disciples, pilgrims and Judean peasantry.

You see as this week plays out,
all of creation will be taken up into the drama.

Jesus will talk about the very earth being in distress
with earthquakes, portents in the heavens, and plagues.

As he dies, the sun will refuse to shine.

But here, at the beginning of the week,
the stones would shout out.

As stones have borne witness in the past
both to God’s covenant with Israel (Josh 24.27),
and to the oppressive architecture of empire (Hab 2.11),
so here, at this crucial moment,
they recognize and rejoice in the Redeemer of creation
as he passes by on the road to Jerusalem.

And, before this week is out,
the stones will play their role,
when one of their number refuses
to keep Jesus in his tomb.

A stone will engage in a radical act
of civil disobedience.

I was a dweller by a dark stream
A crying heart hooked on a dark dream
In my convict soul I saw your love gleam
And you showed me what you’ve done
Jesus, thank-you joyous Son

You entered a life like ours to give us back our own
You wanted us like you, as choosers not clones
You offered up your flesh and death was overthrown
Now salvation is ours
Salvation is ours