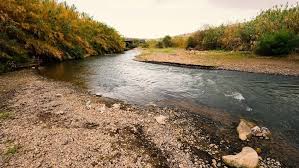 The wind was blowing while the sun beat down on those gathered around John. Despite the strength of the wind, and the noise of the river Jordan, the Baptist’s thundering words were clearly heard by all:

Jesus’ heart leapt in his chest. His face flushed, and his eyes widened. John was speaking about him.

Hearing the words, Jesus knew them to be true, and he knew it was his time.

For years he had looked with despair on the state of the people caught under the empire’s crushing dominion, for years he had prayed and studied the scriptures, knowing that one day the time would come for him to step into his calling, to live into the song his mother had sung to him when he was a child falling asleep in her lap.

This is the beginning, it starts now. With a deep breath, he pushed through from the back of the crowd, up towards John on the banks of the Jordan.

John stopped speaking as he came forward, and a hush fell over the crowd.

Jesus walked in the flowing river, and John followed him. As John held Jesus submerging him under the water, the tightness in Jesus’ chest, the racing of his mind, all fell away. And as he rose out of the water, a peace came over him. An assuredness. A strength.

And he heard, more clearly than he had ever heard anything in his life, a voice saying: “You are my Son, the Beloved; with you I am well pleased.”

As Jesus walked out of the river, the sense of peace did not leave him. He knew who he was now. He knew he was the Son of God, he knew he was called to be the Messiah, and he knew it was time to begin his work.

Up until this point in Luke’s gospel, Jesus hasn’t begun his ministry. He hasn’t done any miracles, he doesn’t have any followers, and he’s certainly not yet widely known as a great teacher. In Luke’s gospel, Jesus’ baptism is the moment in which His identity as the Son of God is publicly revealed, and this revelation together with Jesus’ time in the wilderness, marks the beginning of his ministry. Because even though Jesus’ identity as the Son of God was revealed during his baptism, and even though he recognized his calling was to be the Messiah, he still faced some questions.

What did it mean to be God’s son in this unique way?
After all, even the Caesars called themselves “sons of god”. So what kind of messiahship was Jesus to pursue?

These were questions that could only be answered with prayer and contemplation. And so, the Holy Spirit, that had descended on him during his baptism, leads him out into the wilderness.

But let’s pause there. It’s important to note that it was the Holy Spirit, the very energy of God, that led Jesus into the wilderness. Why? For what purpose would the Spirit determine that the best setting for Jesus to figure out what it means to be the Son of God, the prophesied Messiah, is the wilderness?

The wilderness, in the time of the first century, was understood to be land that was uninhabited or uninhabitable. It was land that was not under the control of anyone, land that had not been put to use, subjected, for anyone’s purposes. Including the Roman empire.

The wilderness was a place uncontrolled by empire. 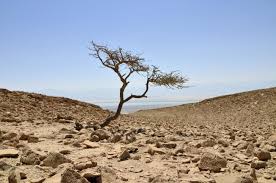 The Spirit leads Jesus into the wilderness to hear the unique voices of God that can only be heard in the wilderness:
voice in the whisper of the trees, the songs of the birds, the cries of animals. It is here that Jesus will discover what his messiahship will look like.

And there’s precedence for this.

It’s long been true that in the wilderness we find out who we truly are.

David discovered what kind of King he was to be when he had the opportunity to kill Saul in a cave in the wilderness, but didn’t. The Israelites, through much struggle, discovered in their wilderness wanderings that their identity as God’s chosen people meant that they were to be a light to the nations.

For time immemorial, people from many different Indigenous nations have set off on vision quests into the wilderness in order to intentionally pursue the presence of the holy, and they come back transformed.

Jesus is led into the wilderness by the Spirit on one such vision quest.

Jesus pursues the presence of God that he knows is found in creation in order to discover what his messiahship will look like… and even so is tempted by the trappings of power.

Jesus may have been out of the physical clutches of empire but the temptation of imperial power was there all the same.

We see the devil’s voice appearing in the story as a string of natural ideas in Jesus’ mind.

First, Jesus is tempted to turn the stones into bread. After all, would God want the Messiah to be hungry? Don’t think about your calling, says the tempter, think about your hungry belly. Don’t rely on God, but feed yourself. You can have the power of self-sufficiency.

No, replies Jesus. It is written, One does not live on bread alone.

Fine then, says the tempter. Then take the kingdoms. Lead the empires.

Why not reform the empire from within?
Bring about the Kingdom of God through the kingdoms of the world.

You can use the mighty tools of empire: militaristic power, vast wealth. The cost? Simply bow down and worship me. Bow down and worship empire. Capitulate to the systems of violence and exploitation through which the empire exists.

Concede power to the empire, and you will gain the power of empire.

No, replies Jesus. “It is written, ‘Worship the Lord your God and serve God only.’

Well then, says the tempter, if you will not use the empire, raise up the people. Demonstrate that you are the Son of God by demonstrating your power. Throw yourself from the highest point in Jerusalem, and have the angels save you. You don’t need to do the hard, thankless work of life with and among the people. You don’t need to humbly serve them with love and grace. Instead, show them your power and make them follow you.

No, replies Jesus. It is said, ‘Do not put the Lord your God to the test.’

When tempted towards power, Jesus refuses, instead grounding his ministry in who he knew God to be. In the wilderness, Jesus determines that his status as God’s son commits him to the strange path of humility, service and finally death.

We are called to follow Jesus, and part of that walk is to follow him into the wilderness.
Like Jesus, we know who we are: we are God’s beloved children in Christ.

But we too need time in the wilderness to discover what this identity means. In the place where we can hear the trees whispering, or the wind singing, or the water laughing, in a place where God’s voice can speak to us from the mouth of creation, we must intentionally seek God’s presence.

It is not a coincidence that those who have bowed down to empire are quick to attack the wilderness, whether it be with roads, pipelines, or mining machines. Because wilderness is threatening to empire. Wilderness threatens empire’s need to control and subjugate. The wildness of wilderness threatens the predictability in which empire thrives. And, most crucially, the unique voice of God that is found in the wilderness, that presence which allows us to find out who we truly are, threatens to destabilize empire at its very core.

Temptation to capitulate to the power of empire has and will continue to come, but facing that temptation with a deep, embodied, knowledge of the Holy found in creation allows us to continue to follow Jesus into lives of humility, service and love.