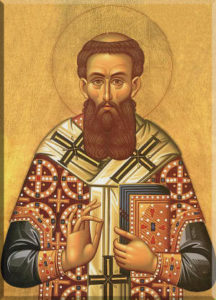 [The fifth in a series of posts responding to articles appearing on The Living Church site.]

On one level, Cole Hartin’s article “Episcopal Authority in a Changing Church” offers fair and practical pastoral advice to folks who find themselves in deep tension with their bishop. Whatever side of the present debate you find yourself on, the encouragement to love and pray for your bishop, while communicating openly and respectfully is good advice.

And we certainly want to affirm Hartin’s closing words:

We strive for unity and mutual understanding as Christians because all of us together have a mission to proclaim the gospel and make disciples of all people. Our fractiousness not only consumes time and energy, but diverts us from the mission God has given to all of us.

And yet, there is still the spectre of “alternative episcopal oversight” that runs through the article. Certainly as a last resort, but it is still there in this piece and throughout much of the discussion, debate, and division in the Anglican Church of Canada (and beyond).

The very idea of alternative episcopal oversight seems to be a very recent innovation in the life of the Anglican church. And one that has an extremely narrow purview.

When was the last time that you heard of a parish seeking alternative episcopal oversight because their bishop had a stock portfolio over a million dollars? Or was very much at home amongst the 1%? Or supported tax cuts to the most wealthy?

For example, and to reach back to the earliest days of our own diocese, the Diocese of Toronto, was there an alternative episcopal oversight lobby when John Strachan was the chaplain and sacred legitimator of the Family Compact, which cemented the power and influence of the wealthy in Upper Canada? These were hardly kingdom values.

Has a parish ever sought alternative episcopal oversight because a bishop couldn’t preach their way out of a paper bag and seemed to have little biblical insight?

Or because the bishop has been known to imbibe with some excess in fine wine and good scotch on perhaps a more than regular occasions?

We could go on, but perhaps you catch our drift. The New Testament says very little about bishops, but in those two places where “bishops” (or overseers) are talked about in the Bible (1 Tim. 3.1-7; Titus 1.5-9) it is clear that a bishop must not be greedy or a lover of money, must have a firm grasp on the Word and be able to preach well, not be a drunkard, and have children who are believers.

If we are going to root our understanding of episcopal authority and behaviour biblically then these are some (certainly not all) of the standards that are required of bishops.

But it seems that no one ever wants to remove a bishop or seek alternative episcopal oversight because a bishop might be very wealthy, theologically thin, a bit of a party animal, and hasn’t raised a bunch of good Anglicans in their household.

Now don’t get us wrong. We’re not slagging off bishops here, nor are we (at least in this piece) slagging off episcopal authority in the church.

In fact, some of our best friends are bishops!

And we’ve got Rt. Rev. friends on both sides of the current debate on same-sex marriage and LGBTQ+ inclusion in the life of the church.

Our concern, indeed our alarm, is that the issue of same-sex marriage is the only one concerning which we hear any talk about the possibility of seeking alternative episcopal oversight these days.

The only issue around which there is suggestion of alternative episcopal oversight has to do with how the sexual relationships of gay people are ordered, specifically the desire (in the present debate) for same-sex couples to enter into the covenant of marriage.

Now one might respond by saying that sex is the issue because it is here that “conservatives” (their self-identification) perceive theological deviation and biblical thinness in bishops who support changing the marriage canon. Indeed, Hartin goes so far as to say that, “Currently, in the Anglican Church of Canada, ethical and theological questions have been put aside as the canonical validity of same-sex marriage is coming to the table.”

This is simply not true.

In the Anglican Church of Canada, deeply theological, ethical and biblical arguments for and against same-sex marriage have been on the table since Cole Hartin was just a young lad and it is just a tad disrespectful and rich for him to declare otherwise.

So why is it that the main issue around which there is talk about serious disunity is sex? And specifically someone else’s sexuality?

As far as we can tell, none of the authors in the current series of articles from The Living Church identifies as queer. And we are wondering why this issue is the issue around which folks might want to talk about alternative episcopal oversight.

Not the excesses of capitalism, not the climate crisis, not immigration, not racism.

We might disagree on a number of these issues, but it is sex that makes us start worrying about the unity of the church.

Perhaps we shouldn’t be surprised by this. After all, throughout most of the history of the church, sexual sins have always been considered more serious sins than economic injustice or the violent exercise of authority.

That is why in the tradition one of us (Sylvia) grew up in, couples who were pregnant outside of marriage had to confess in front of the church. No one ever stood up to confess cheating someone in business, even though there were some in the congregation who did this regularly, and even though the prophets condemn such actions in no uncertain terms. The current obsessive focus on the sexual practices of some in our communities is no different than these old condemnations.

If there is one thing that gets people upset, it is sex.

Given the way that the church fathers embraced Platonism with its devaluing of the body, this is perhaps not surprising.

It is perhaps also telling that there is significant diversity amongst the bishops on a whole host of weighty theological and ecclesiastical matters – from sacraments to liturgy to the creeds, Christology, Pneumatology, Ecclesiology, Eschatology, and the nature of Biblical Authority. But no one is talking about alternative episcopal oversight around these real and significant theological differences. And (mostly) we are glad for that.

Somehow, as a church, we have been able to hold together around the core of the gospel:

Christ has died,
Christ has risen,
Christ will come again.

What would happen if we took Cole Hartin’s closing paragraph seriously and asked how all of this impacts the mission of the church? He is undoubtedly right in saying that so much of this fractiousness “diverts us from the mission God has given to us all.” If that is true, then why would we even countenance something as extremely divisive as alternative episcopal oversight?

You see, this kind of disunity doesn’t just divert us from the mission, it damages that mission.

But we have one more question that is never raised or answered in these discussions.

Precisely how does having a bishop who disagrees with a parish on the change to the marriage canon impede the missional life of a congregation?

Do congregations raise the views of their bishops with every new attendee and at every event they host?

In our lifetime there have been bishops who have denied the bodily resurrection of Jesus, a belief we consider non-negotiable biblically and confessionally, and parishes under their authority have still managed to preach the gospel, administer the sacraments, and practice missional discipleship.

And yet they have not sought alternative episcopal oversight, even though there were very strong pastoral arguments to do so.

And yet, when those who have had canon law on their side realize that they are about to lose their majority and privileged status, they demand that the rules be changed so that they don’t have to minister with someone that they disagree with.

There seems to be a concern that when they have lost power they are going to be somehow discriminated against by those who previously had no power. This needs to be named.

And it is unclear what such discrimination could look like, given that there are no circumstances under which any priest or parish would be forced to solemnize same-sex marriages.

If, as it appears, we’re going to continue to disagree on this, we suggest three things:

First, let’s stop all this talk about alternative episcopal oversight.
If we can’t graciously disagree with each other over an issue like same-sex marriage, then the church should probably just die.

Second, let’s create space for each other.
We need gracious episcopal oversight. Just as no affirming bishop will require a priest to solemnize a same-sex marriage, so also should no conservative bishop prohibit such solemnization, should the change in the marriage canon pass.

But third, and for us most important, let’s shift our ecclesial conversation to the gospel itself.
What do we mean by the gospel? What is discipleship?

We have been talking past each other long enough, and it is time for a renewed biblical theology that faithfully speaks the good news into our cultural context.

Brian is an activist theologian and the CRC Campus Minister at the University of Toronto. Sylvia Keesmaat is a biblical scholar-activist whose passions are teaching the Bible, heirloom tomatoes, and permaculture.

2 Responses to “Episcopal Authority and the Mission of the Church”