[The second in a series responding to articles posted at The Living Church on the proposed change to the marriage canon in the Anglican Church of Canada to affirm same sex marriage.] 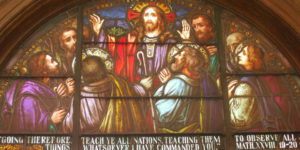 Jeff Boldt’s article, “Plural Pedagogies in the Anglican Church of Canada” is a strange betrayal of the very evangelicalism that Boldt wants to promote. While it is not strange to find an evangelical espousing the procreation argument regarding the purpose of marriage, it is pretty much heretical for an evangelical to identify procreation and the biological family as the prime source of evangelism.

At its best, Boldt’s article is counselling conservative Christians in the Anglican Church of Canada to diversify. Do you feel isolated and marginalized in the silos of Anglicanism? Then find a wider group of friends and allies. There is nothing controversial about this. Folks on both sides of the debates that have come to a head around the upcoming vote on changing the marriage canon have always done this. Just as Proud Anglicans have a natural affinity with LGBTQ+ Lutherans so also are evangelical Anglicans more likely to have fellowship with Pentecostals and Baptists.

Boldt is right:
“The Church of the future is neither Anglican, Presbyterian, Coptic, nor Catholic.”
So why don’t we live into that eschatological future by deepening our ecumenical fellowship?

And Boldt is also right in calling us to ecclesial practices that are alternative to both cheap spiritual consumerism and narrow denominationalism:

“Whatever this alternative is, it must be both genuinely local and ecumenical. How do we live generously at both levels? Is there a way to intentionally live long enough in a single place so that our friendships in and outside of the church cost us something? When do we begin to sacrifice mobility and professional advancement for the sake of this community?”

However, anyone reading Boldt’s article who is on the “progressive” side of the present debates in the Anglican Church would undoubtedly note that there is nothing “generous” about his depiction of fellow Christians (or even his Diocesan Bishop!) who deviate from the conservative and “traditionalist” views of sex, gender and marriage.

Let’s be clear. Boldt is only encouraging an ecumenical generosity in relation to conservatives in other denominational traditions. That is a truncated generosity to say the least. Indeed, his rumination about “alternative episcopal oversight” is born of a fear that conservatives are an oppressed minority and that affirming parishes are “no-go zones” for conservative clergy.

This is just a tad precious from a priest whose own parish is pretty much a no-go zone for LGBTQ+ Christians, especially if they seek the blessing of the church on their covenantal unions.

But hey, Boldt isn’t alone in this. We all choose our friends and our allies. Truth be known, pretty much all of us have borders around our ecumenical generosity.

The deeper problem with Boldt’s article is that it is heretical.

That Boldt assumes the traditionalist view that marriage is a union between one man and one woman for the purposes of procreation is not surprising. That he doesn’t bother to provide any biblical warrant for this position is also not surprising. You’re more likely to hear conservatives quote the Book of Common Prayer on procreative marriage than the Bible because it simply isn’t there in the Bible. Certainly not in the New Testament.

What is shocking and heretical is to hear an evangelical describe the biological family, indeed the act of procreation, as the primary form of evangelism.

Let’s begin with Boldt’s curious contrast between parents and bishops. “Far more people are converted by their parents than by bishops,” he writes. Now apart from the fact that most folks who are cradle Anglicans (or indeed, cradled in any kind of Christian tradition) generally do not describe their faith life in terms of “conversion,” I’m wondering how this notion of the biological family as the prime means of evangelism has any biblical warrant.

Any self-respecting evangelical knows that when we talk about evangelism we are not talking about being “born into” a faith, but hearing and responding to a call to rebirth, to a radical transformation of one’s life, being incorporated into a radically alternative and liberating story about Jesus, the Kingdom and salvation.

So when Boldt writes that, “it is incontestable that when parents do their job, they are effective evangelists,” I have a mixed response. Well, yes, Christian parents do indeed attempt to raise their children to follow Jesus.

And yet, Jesus himself radically redefines the whole notion of the family away from biology and towards the fellowship of those who follow in the Jesus Way.

Wasn’t it Jesus who said,

And didn’t he push it even further when he said,

And then, just in case we didn’t get it, didn’t he conclude by saying,

In the economy of the Kingdom the biological family is clearly supplanted by a new family of siblings, brothers and sisters in Christ.

So, when Boldt writes, “Traditionalists think the Bible does in fact reveal that God has a purpose for genealogy,” one wonders whether he had these texts in mind.

Genealogy is certainly not the prime means of evangelism according to Jesus.

Ask any convert and they’ll tell you how all of this makes total sense. When I decided to follow Jesus as a sixteen year old kid hanging out on Yonge Street in Toronto, I knew that I was being adopted into a new family, with new siblings, a new common story together with a new family meal. No wonder that adoption is a central metaphor for St. Paul’s understanding of the church. (Rom. 8.15, 23; 9.4)

And do you know who understands this dynamic
better than anyone these days?
Folks in the LGBTQ+ community.

Rather, the language of “chosen family” is an acknowledgement that family is bigger than biology.

The church has always known this. Jeff Boldt’s article comes dangerously close to forgetting it.

Boldt writes, “As we all know, the traditional understanding is that the procreative potential of marriage has been ordered by God for the sake of forming children to be wise Christian adults.” Really? I understand that is the traditionalist understanding, but how about a little exegesis to give such a claim at least a semblance of biblical warrant?

Of course, there are all kinds of other offensive failures in Boldt’s article:

And listen to this: “ … who can eliminate the inconvenient and persistent fact of biological families from the life of our parishes? If Anglican churches grow, it’s only because families are doing their jobs.”

What on earth is he talking about?

Who is trying to eliminate biological families from our parishes?
What kind of reactionary fear-mongering is this?

I assume that Boldt has noticed the hemorrhaging
of young adults from the church.
I assume he knows that the “Dones” were all raised in Christian families.

But more devastating is that an evangelical, from Trinity Church Streetsville no less, would think that procreation should be the source of church growth and not evangelism.

Obviously, Boldt hasn’t read the end of Matthew 28, or the beginning of Acts, or paid attention to what happened at Pentecost, or pretty much the whole New Testament.

Boldt is right. “We live in a church of plural, conflicting accounts of the gospel.”

But when he goes on to write,
“The conflict, as I’ve described it, is a gospel issue because it is about the created means by which the gospel is transmitted in time” he has uttered heresy.

The biological family is not the created means by which the gospel is transmitted in time.

12 Responses to “The Heresy of Procreative Evangelism”