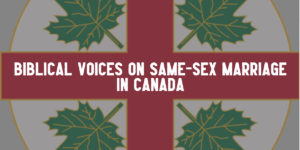 There is “no small dissension and debate”(Acts. 15.2) in the Anglican Church of Canada as we approach the General Synod in a few weeks. And there is nothing surprising about that, since the very first synod of the church was occasioned by similar dissension and debate. In fact, without such dissension there would have been no need to convene the Jerusalem Council recorded in Acts 15. However, while the Acts of the Apostles tells us that there was consensus and unanimity (15.22, 25) at the end of that first synod of the church, it is clear that there will be no such unanimity, consensus or unity at the conclusion of the 42nd Synod of the Anglican Church of Canada.

So when I read Bishop Joey Royal’s article, “Conservative Voices on Same-Sex Marriage in Canada” , somehow the Jerusalem Council came to mind. You see, Royal’s argument would have flowed easily off of the tongues of the Christian Pharisees who were the “conservatives” whose agitations occasioned that synod in the first place. If you haven’t read Bishop Royal’s piece yet, there are two reasons why you should do so before reading my response. First, it is only fair to read for yourself what I am criticizing. Second, my critique only makes sense if you have seen the way in which the bishop mounts his argument.

Let’s imagine what would have happened if there was no unanimity at the Jerusalem Council, and one of the leaders of the “conservative” faction (Royal’s self-description) wrote a pastoral letter to his followers. It might have sounded something like this.

It is clear that the fellowship of the Way has changed in fundamental ways. Our church has increasingly embraced the most progressive elements of Gentile culture.

What is surprising is not that the church has been impacted by culture, but how quickly traditional beliefs have been swept away and replaced by revisionist alternatives. This has resulted in deep fissures and enduring division in the church. The momentum seems to be on the side of revisionists, as evidenced by the widespread embrace of uncircumcised Gentiles in the church. That particular issue was the big one on the agenda in Jerusalem, but I cannot help but see this entire process as a misguided attempt to overturn the consensus of our messianic movement. Ignoring the voices of our departed elders in the faith represents a failure to take seriously God’s Word given in Torah and mediated through our revered Jewish traditions. Let’s be clear: nowhere in the Torah – Nowhere! – do we ever read that Gentiles can be welcomed into the covenant apart from circumcision.

This moment in the life of our church is no mere provincial squabble; it is a full-blown crisis, and one which will impact not only the church in Judea but also the worldwide mission of the gospel. Most worrisome is how we got here. The “debate” which led us to this unorthodox inclusion of uncircumcised Gentiles was hardly a debate at all, but rather a question-begging testimony time, followed by a unilateral apostolic decision by James buttressed by pastoral pronouncements given in the narcotizing language of inclusivity. Fidelity to Torah, and thereby to the God of Torah, was thrown out the window in a moment of unreflective “spiritual” enthusiasm.

While the presenting issue was the inclusion of uncircumcised Gentiles, it is not the only issue, nor is it the fundamental one. Inclusion in the covenant without circumcision, like other distortions of Christian teaching, arises from a rejection of scriptural authority. Of course, revisionists would not describe it that way and, to be fair, their rejection is not a wholesale rejection of the entire scriptures. It is rather an incremental, partial rejection – choosing this bit over that bit, bending the meaning of this verse, pitting one tradition against another, reinterpreting a passage here and there. At the Council James brought out a quote from Amos (9.11,12) about the inclusion of Gentiles as if this settled the issue. But no one was arguing about whether Gentiles could be part of the movement of Messiah Jesus! The issue was whether they would, like all Gentiles before them, be required to submit to the sign of the covenant – circumcision. Amos says nothing on this question! James was engaging in a hermeneutical acrobatics that will have the effect of destabilizing any authoritative use of the Torah.

When fellow Christians visit our fellowships for the first time, I often tell them that in Judea we “speak Torah.” When we talk about our Christian faith, or seek to understand God’s will, we look to Torah to discipline our speech and give coherency to our ideas. Of course, for this approach to make any sense at all, we have to assume that the Torah is God’s Word written, that it is fundamentally different from other books, that the Holy Spirit uses it to “read us” and bring to us words of judgment and truth, and that Jesus Christ is the centre on which all things converge. Such a theologically thick account of revelation sits uneasily with contemporary efforts to accommodate Scripture to culturally-defined norms of belief and behavior.

A number of us are writing series of letters to the churches as an attempt to return us to the scriptural source of our faith. The theological vision undergirding these letters is conservative in the sense of trying to conserve the scriptural moorings of our messianic movement, lest it continue to float aimlessly on the seas of cultural change.

Now I suggest that any self-respecting Judean Christian of the Pharisee sect could have written a letter such as the one I here imagine. And you will notice that it is pretty much all in the language of Bishop Royal, who is representative of the conservative side of this debate.

After citing Paul’s admonishment that we “maintain the unity of the Spirit in the bond of peace,” Royal poses this crucial question regarding the changing of the marriage canon: “will this decision help the unity of the church or harm it?” His Pharisaic predecessors would have replied, “In the case of allowing uncircumcised Gentiles full admission into the church, the answer is clearly the latter ….” And in terms of the traditions of Judaism they had the Torah on their side. Yet, the Jerusalem Council listened to the stories of what the Spirit was doing amongst the uncircumcised, discerned that this was the movement of God and the fulfillment of the promises of Israel, and made the bold, courageous and radically innovative move of welcoming those whom they had before dismissed as unclean. Every Gentile Christian in the Anglican Church of Canada should thank God that the Jerusalem Council disagreed with that ancient exclusionary theology and welcomed us into the faith without the central Torah stipulation of circumcision.

That Bishop Royal’s argument  resonates so well with the conservative and pharisaic voices at the Jerusalem Council should give us pause. His claim to be biblical today rings as hollow as the claims of the conservatives at that first synod so long ago. We have seen how the Spirit moved at the first synod of the church. I pray that the same Spirit will move so mightily again at the 42nd Synod of the Anglican Church of Canada. Christian pharisaism was overcome in Acts 15. Let’s not tolerate its revival in our midst today.

Note: For a fuller argument on how the Jerusalem Council in Acts 15 is instructive for how the church deals with controversial issues such as LGBTQ+ inclusion see Sylvia Keesmaat’s article, “Welcoming the Gentiles.”

8 Responses to “From Jerusalem to Vancouver: The Pharisees Strike Back”