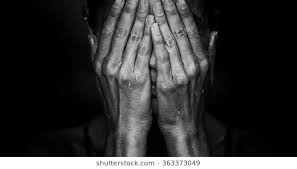 God had hoped that it would be different.
Right from the outset,
God had hoped for a world of abundance,
full of fruitful plants,
creepy insects,
dazzling birds,
and wonder-inducing sea creatures.

And in the midst of it all,
earth creatures,
human beings,
God’s image bearers,
to secure the seed supply,
ensure the abundance continued,
to be God’s own nurturing presence
for all of creation.

But instead,
human beings abandoned that calling,
looking around for something
that would fulfill their own desires,
instead of the needs of creation.

And death, not life,
became the norm.

And with death,
the grief of God,
the tears of God,
over creation
and the earth creatures
that God had hoped in.

Remember with me
some of the highlights of the story,
the story of God and humanity
throughout the scriptures.

Remember the story of the flood?

The children’s stories seldom begin
where they should,
with the grief of God.

Grief for creation
caused God to decide on destruction.

Grief for violence on the the good earth,
caused God to imagine a new beginning
with Noah.

But that grief never disappeared.

Throughout the story
God’s anguish is seen again and again,
as the people forget their story,
forget who they are called to be
and forget who their God is.

We can taste the pathos
in some of the prophetic laments,
laments from the mouth of God.

Listen to these words from Jeremiah 3.

I thought
how I would set you among my children,
and give you a pleasant land,
the most beautiful heritage of all the nations.

And I thought you would call me, My Father,
and would not turn from following me.

Instead, as a faithless wife leaves her husband,
so you have been faithless to me, O house of Israel.

Can you hear the dashed hopes?

I thought it would be so good,
says God,
you and me, together,
enjoying this land and each other,
in faithfulness and love.

And instead, betrayal, brokenness, and infidelity.
The closest relationship possible between two people,
torn apart.

God’s grief is threaded through the story
from the very beginning to the very end.

You see, Leonard Cohen is right,
there ain’t no cure for love,
there isn’t any way that God’s love for us can be lost.

And, paradoxically, that love means that God
will never be able to escape from grief.

Such love means that grief will always find God,
again and again.

Which is what we see in today’s story.

Jesus hears that his friend Lazarus is sick.
In fact, Jesus is told that the friend that he loves is ill.
But Jesus doesn’t go immediately to see him.

The disciples are glad for this:
because it is clear that going to Bethany,
the home of Lazarus,
would be dangerous for Jesus.

It is close to Jerusalem and the disciples
are worried that Jesus will meet his own death there.

But Jesus delays not out of fear of death,
but because he knows that in the face of death
he has a word of hope.

And so he waits.

He waits until Lazarus is dead before
going to Bethany.

The disciples accompany him,
in fear and bravado,
telling each other

Let us go, that we may die with him.

So Jesus goes,
and he meets not his own death,
but the death of Lazarus.

And when he saw their grief,
Jesus himself was moved to tears.

Just as God grieves throughout the story,
Jesus was overcome with tears
at the death of his friend,
and at the grief of those who loved him.

This was not how it was supposed to be.

Life and abundance were God’s hope
for humanity on the earth,
not death and sorrow.

Jesus weeps not only for the loss of Lazarus,
not only out of compassion for
Martha and Mary,
bereft and lost without their brother,
but also because of a deeper grief,
that this is not how the story was to end,
this is not what God had in mind at the outset.

And out of that grief,
Jesus acts.

Jesus raises Lazarus from the death
not to show his power,
but because it is God’s deepest desire
to bring forgiveness in the face of brokenness,
restoration in the face of betrayal
healing where there is illness,
life in the face of death.

And, paradoxically,
it is this new life,
this restoration,
that seals Jesus fate
in the gospel of John.

It is because of the new life given to Lazarus,
that the chief priests and the elders
decide to put Jesus to death.

The chief priests and the elders,
who have no grief over death,
who have no sorrow over
betrayal and brokenness,
can find no joy in new life.
The are so far removed from God’s commitment to life,
and so addicted to a pathway of death,
that they are determined
to put Jesus to death.

No doubt they were oblivious to the irony.

Oddly enough,
for many of us,
this story of restoration to new life,
is also very hard.

If God wills life,
then why are we faced with death?

Why are parents left grappling
with the death of infants,
or teenagers left destitute
without parents,
or husbands left grieving
the sudden loss of their wives?

Why the wait God?
Why the death now?
If you so deeply will life for us,
if you grieve death so much,
if you so deeply desire our flourishing
and our joy and our healing,
why are we left in these places
of overwhelming grief,
washing over us,
drowning us.

There isn’t really a satisfactory
answer is there?

All we know is this.

Not even God knows how to avoid the grief.
Because, in a broken world,
grief comes, paradoxically
with the gift of love.

God grieves over this world,
because God’s deep love
is anguished over the death that we create.

Jesus grieves over Lazarus,
because Jesus’ deep love for Lazarus
can’t bear to see the loss his death has created.

We grieve over each other
because our deep love
for one another,
is torn open by death
our deep love for our parents,
for our children,
for our wives and husbands,
for our friends.

But we also know this,
in spite of God’s deep grief,
in spite of the fact that again and again
we bind ourselves to betray,
in spite of our deep inclinations
to unfaithfulness and violence,
God dares to dream of a future
a new heaven and a new earth,
where love will not lead to grief.

God dares to dream of a new earth.
God dares to imagine moving into the neighbourhood,
and living in the midst of us.

This is such a daring vision for God,
because it is a vision that God has the audacity
to dream in the midst of grief,
in a world where Lazarus dies,
in a world where the authorities
plan the death of Jesus the life-giver,
in world where leaders murder journalists,
and plan to meet desperate migrants with violence,
in a world where we continue to kill
the creatures that we were called to nurture and serve.

In that world, God dares to dream of another world,
a world without grief.

Through tears of grief,
God dares to dream of a world without tears,
without death.

For some of us
that is a vision of comfort.

For some of us,
this dream of God pulls us forward,
lights a fire of hope within us,
enables us to continue to work
towards the life on the new earth
that God promises.

For others of us,
that might be too much to ask.

For some of us the grief is too raw,
the sorrow too deep,
the pain too fresh.

For those of us in that place,
maybe it is enough to know
that we are held in our grief,
by the love and grief of God.

Maybe it is enough to know
that Jesus weeps with us.

Maybe it is enough to know,
that our grief and our story,
are held in the grieving heart of God.

One Response to “The Grief of God”