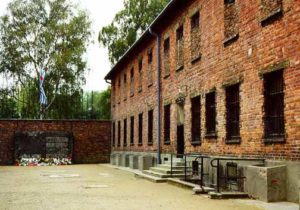 Outside there was an execution wall where thousands were shot.
In the basement death came much more slowly.

It wasn’t a building that I wanted to walk through last Sunday,
but it was important to go, not as a tourist, but to bear witness.

While walking through the basement I noticed a tiny cell
with a small shrine to Maximillian Kolbe. 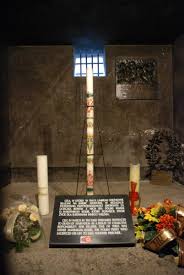 Kolbe was a Franciscan priest who gave his life
in the stead of another man who had been condemned.

It was death by starvation and dehydration,
but after fourteen days, his persecutors,
amazed that he was still alive,
killed him with a lethal injection of phenol.

It is a short path from Kolbe to Archbishop Oscar Romero.

They both followed Jesus in giving their lives for another.
They both suffered at the hands of oppressive regimes.
They both died violent deaths.

And, they stand just a few metres apart
above the Great West Door of Westminster Abbey.
Sculptures of Kolbe and Romero,
together with Martin Luther King Jr,
Dietrich Bonhoeffer and six others
are memorialized as Martyrs of the 20th century. 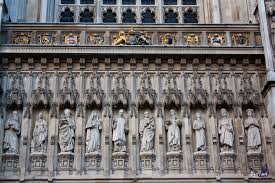 As a martyr of the church, Kolbe was canonized
by Pope John Paul II on October 10, 1982.
He is, amongst other things, the patron saint
of political prisoners.

For me, it will be one week.
From Sunday, October 7 in Auschwitz
meditating on Kolbe
to this coming Sunday in Toronto
celebrating Romero.

While this kind of canonization is a tradition
of our Roman Catholic siblings in Christ,
the martyrs of the church are for all of us.

While Kolbe (like Bonhoeffer) was a victim
of a German Nazi ideology,
Romero’s life was taken by a
made-in-America ideology of capitalism.

Both are counter gospel.
Both are expressions of empire.
Both will sacrifice the most vulnerable.
Both serve a racial and economic elite.

And so the Wine Before Breakfast community
is honoured to join with our friends at the Church of the Redeemer,
hand in hand with Mary Jo Leddy and the Romero House community,
and in solidarity with our Roman Catholic siblings
in celebrating the canonization of Blessed Oscar Romero.

The Wine Before Breakfast Band is cooking up
Songs of Liberation and Hope
from artists like Jackson Browne, Sheryl Crow,
Martyn Joseph, Holly Near, Bruce Cockburn,
Bruce Springsteen, Emmylou Harris, and U2.

David Howells, interim priest at Redeemer,
will be celebrating the Eucharist with us.

Mary Jo Leddy will be preaching.

And I have curated the liturgy.

This is a wonderful moment in the life of the church
in a time when it has very few such moments.

Check out this short animation on the ministry of Oscar Romero!

2 Responses to “From Maximillian Kolbe to Oscar Romero”