It was one of his last works of art.
It was a gift to us and it captured it all.

Greg Spoon was better known to folks
at Wine Before Breakfast,
his community at Sanctuary,
and on the street,
as “Iggy.”

And his gift of art to us said it all.

A loaf of bread and a bottle of wine.
A goblet and a table laden with fruit.
A candle and a Bible.
A musical staff scrolled across the page,
with “Wine Before Breakfast”
written where the notes would be.
And a butterfly, a symbol of transformation.

Iggy ‘got it.’
He knew what WBB was about,
and he knew that community happens around a table.

The only question was,
what to put on the bottle?
What should be written on the label of that wine bottle?
As he asked me that question,
he pulled a bottle of “Kelly’s” out of his bag.

Kelly’s – the cheapest wine on the market. 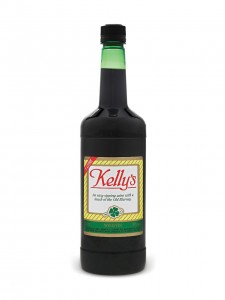 Kelly’s – a sweet sherry that was the choice
of down and out winos.
Kelly’s – what Iggy drank when he was off the wagon.

“Maybe we should put this on it,” Iggy suggested.
“Yes,” I replied, “that is exactly what you should put on that label.”

Yes, community happens around the table.
Yes, community is forged as we eat and drink together.
And yes, we come to that table deeply broken.
So it only makes sense that we would drink Kelly’s.

Can we receive the blood of Christ in the form of Kelly’s?
Can this sacrament be celebrated with Kelly’s?
Can we redeem even Kelly’s,
and all that this cheap sherry symbolizes,
through prayer and shared communion?

Iggy knew that we could.
And so Iggy inscribed “Kelly’s” on that bottle.

Iggy died on March 17,
a day shy of his forty-seventh birthday.

This First Nations brother had seem some hard times.
He was bruised and broken, acquainted with grief.
He was a teacher, an artist, a man of deep wisdom.

On the two Tuesday mornings that Iggy was in the hospital,
we placed his art work on the altar,
and during communion, bread and wine
were placed before the picture.

Then, at the end of each service,
two members of the community would receive the sacrament.

Well, we stopped doing that after our brother died.
We don’t need to eat the bread and drink the wine for Iggy anymore.

And every time I take the bread and drink the wine,
every time I grab a coffee and a muffin on a Tuesday morning,
every time I look at Iggy’s gift,
I’ll remember, I’ll hope, I’ll wait.

Here is a peek at Iggy’s gift. For a better reproduction see here. 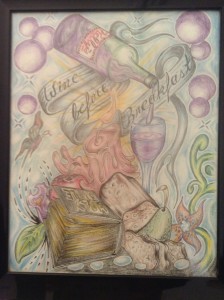