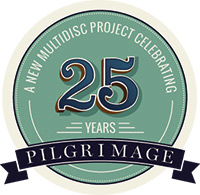 Steve Bell’s box set arrived in the mail and I figured that this was going to be a bit of journey – four CDs and a documentary film on the artist. But you know, I’ve got a deep respect for Steve, so I was excited to give this a good listen.

So the CD went into the player in the car as I headed out to run some errands and pick up my buddy Jeremy from his special ed class at the local high school. It’s a Thursday afternoon tradition. I get Jer, we run some errands, head back to the farm, do some chores together, eat a big dinner (the boy can eat!) and then he heads home.

I figured that I could get a few tracks in before I got to the school, and then … well we’d see what would happen.

In the last number of years, Canadian singer/songwriter Steve Bell has teamed up with British poet/priest Malcolm Guite to produce some work of profound spiritual depth. It may well be that years from now a biographer will refer to the ‘pre’ and ‘post-Guite’ periods in Bell’s work. Don’t get me wrong, Bell is a very fine songwriter and an over-the-top exceptional guitarist. But it seems that the Bell/Guite collaboration and friendship has taken Bell’s work (and likely Guite’s as well, but I don’t know) to a new place.

This was clear in Bell’s 2012 release, Keening for the Dawn and continues with the recently released Pilgrimage. Actually “Pilgrimage” is the name of both the first CD and this boxset of four CDs to mark twenty-five years of recording and performing by Bell. While there is nothing unique about an artist releasing a retrospective boxset, this project is different. The set opens with this album of new pieces called Pilgrimage. While Keening for the Dawn was an Advent album, Pilgrimage takes us on a Lenten journey. I’ll offer a fuller reflection on this opening album in another post, but let me tell you what happened on this first listening.

I found myself immediately drawn in by the ever-recognizable violin playing of Hugh Marsh on the first track, “Think about that.” And as the album unfolded I increasingly entered into a deeper and deeper meditative place. Before you know it Steve is laying out a beautiful rendition of the traditional folk tune “Wayfaring Stranger” followed by Mary Gauthier’s “Mercy Now” and he’s got me meditating on death. But now it is time for me to get Jeremy from school.

By the time Jeremy gets into the car the Bell/Guite hymn, “Mary (Theotokos)” is finishing up and I’m not sure how this music is going to fly with my buddy. Well, a couple minutes down the road and Steve is playing an instrumental made for pilgrimage by his friend Roger Schmidt. Truth be known I’ve always been blown away by Steve’s virtuosity on the guitar. And I’m totally ready for this bit of stunningly played ragtime. Then I sense Jeremy moving to the music. I look over and he’s got his whole body grooving and the biggest smile on his face that you could imagine. This tune has totally animated my friend and we are in a moment of sure joy together bopping to the music.

A couple of songs later we have another instrumental, “Pop and the Lads” and that smile is back on Jer’s face. Musically, Steve is playing with his grandsons, and it feels like Jeremy and I are in that playful tussle on the floor with them.

As Steve launches into Ken Medema’s “The Riddle Song,” Jer catches the tune and some of the words of the chorus and he’s singing along. The last track on the album, Alana Levandoski’s “Felix Culpa,” offers a lullaby for folks in the wilderness. “He who watches over you/will never slumber nor sleep/Oh my child lay your burdens down/lay them at my feet.” And this Appalachian folk tune has both of us singing, both of us feeling held and loved.

Here’s the deal. While my friend Jeremy  has certain intellectual ‘special needs’ he has a keen and profound sense of musical beauty and power. He is aesthetically more ‘able’ then a lot of folks. And when Jeremy, through his body motion and his singing, tells me that something good is happening in our musical environment (literally in the confines of a car on a cold winter afternoon), then I take that very seriously. I had a hunch that this was an important album before Jer got in the car. Jeremy convinced me that my hunch was right. If it flies with Jeremy, it flies with me.

The second CD is titled Unardorned. Here we have Steve and guitar, ‘unadorned’ by any other instrumentation or vocals, performing the songs that his fans have consistently identified as the pieces that most deeply resonate with them. Delightful in its elegant simplicity, Bell shines as he offers these songs again to his fans. And again, Jeremy was happily singing along to songs that he had never heard before. The trip was over before we got any further in the boxset.

Steve Bell will tell you that his art has always been a community project. And so the third CD in the set has Steve sit out and his musical friends take over. Artists like Carolyn Arends, Mike Janzen, Glen Soderholm, Jacob Moon and the aforementioned Malcolm Guite take up Steve’s songs and give them their own spin and interpretation. Aptly titled Good Company this collection resonates the love and respect that these artists have for Steve Bell. Don’t get me wrong, there is no hagiography going on here. Just some good music with good company.

And then we get to the final CD in the boxset, the aptly named Landscapes. You see, on this recording we have the landscapes for the songs, the aural context in which the artist delivers his lyrics. Only there are no lyrics, there is no voice. Here we have recordings from across Bell’s twenty-five year career remixed without the voice. Worried that I was about to hear karaoke tracks I began to listen with some trepidation. What a delightful surprise. We all know that Steve is one of this country’s finest guitarist. On these tracks the guitar is allowed to shine, but so also are the musical voices of those who have joined Steve in the recording studio and on the concert stage over all these years. What you don’t hear when the voice and lyrics are driving these songs is now offered for your close listening (and it merits close listening) or even as the aural ‘landscape’ for your daily life. But even if you listen to these tracks while cooking dinner, don’t be surprised if a moment of music genius interrupts you. Let it happen.

A boxset from a singer/songwriter with one CD of brand new material, another of the artist and guitar replaying his fan’s favourite songs, then a CD of his friends playing his songs in honour of his artistic contribution to the Christian community and beyond, and then closing it off with songs spanning the career remixed without the vocals. Now that is no normal run-of-the mill boxset. This is no cheap marketing ploy to get folks to buy again songs they already have. Rather, we have here a beautifully creative celebration and a reflection of twenty-five years of music making.

John G. Stackhourse Jr. essay, “Steve Bell: Comforter of God’s People” offers an illuminating biographical reflection on Bell’s remarkable journey. Again, this is no hagiography, no sugar coated story of God’s blessing of unqualified success on this faithful artist. Rather, the struggles along the way, the financial, personal and physical crises, the spiritual wrestling match that is the life of this artist – it is all told with candor and grace. I only wonder whether characterizing Bell as a ‘comforter’ of God’s people quite tells the whole story. We see in the essay that the Christian community often rejected Bell’s work when it went in aesthetic directions that were unfamiliar. We know that Steve’s growing awareness of the injustice of Israel’s treatment of the Palestinians (which lies behind his album Keening for the Dawn) has been received in some quarters as almost heretical. Insofar as Bell’s work is priestly and pastoral in character, he is indeed a ‘comforter’ of God’s people. But when he moves outside of comfortable musical forms and begins to push against received doctrines that legitimate oppression, well then he takes on a prophetic mantle and becomes a ‘troubler’ of God’s people. My hunch is that there will be a little more trouble in the Bell catalogue in the years to come. I hope so.