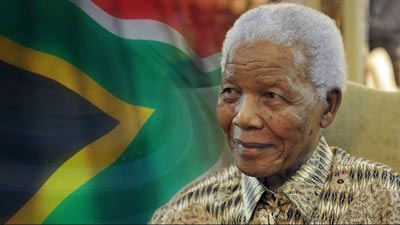 As I’ve been reflecting on the death of Nelson Mandela, two thoughts keep crowding my mind.

The shame of Calvinism and the vacuity of Deconstruction.

I’m sure that most of my readers will catch the significance of the first reference, but perhaps not the second.

As someone who stands in the tradition of John Calvin, indeed, who is a servant of the Christian Reformed Church, the death of Mandela recalls for me (amongst many other things) one of the greatest moments of shame in the history of ‘Reformed’ churches. Throughout the history of Apartheid and Afrikaaner rule in South Africa, the oppression of ‘blacks’ and ‘coloureds’ received explicit blessing from the vast majority of Reformed churches in that country.

But these churches didn’t just ‘bless’ the racist policies of Apartheid, they provided scriptural legitimation  for them as well. Through a dubious reading of the biblical story, African people where characterized somehow as descendants of the biblical character, Ham. Preachers used this reading to argue that blacks were forever destined to be a lesser race, in need of the benevolent rule of whites. Now this isn’t that surprising, really. You see, a sin as heinous as racism, and a policy as evil as Apartheid, will always need some sort of sacred blessing. How else could you justify such things, unless God Himself, were to command it!

However, it wasn’t just a spurious exegesis of the bible which lay behind the repressive policies of the Apartheid State. More pernicious was (and is) a Calvinist understanding of law and the state. I have voiced my opinion on how Romans 13 is misinterpreted a number of times on this site. But one of the most devastating examples of how this text about ‘obeying the authorities’ has been employed in our times is precisely in the imprisonment and repression of Nelson Mandela and the leadership of the African National Congress. At the heart of the issue was that these people dared to rebel against the state, dared to call for radical change, and dared to advocate armed rebellion against that state. And in the eyes of this kind of Reformed theology, if the state is instituted by the will of God, then any such opposition to the state is an unforgivable sin.

This theology is, I say, a deeply devastating moment of shame in the history of Calvinist Christianity! Granted, most Reformed denominations around the world sooner or later came to declare that Apartheid was a heresy. But I’m not sure these denominations have grappled with the theology that was at the heart of this heresy.

And somehow, in the grace of God, a man who was so oppressed and violently persecuted by the proponents of such a theology, found a way both to remain a follower of Jesus, and to enact personally and nationally the ethic of Jesus. Nelson Mandela forgave his oppressors.

Now forgiveness is what brings me to Deconstruction.

A number of years ago a documentary was released called “Derrida.” Accompanying Jacques Derrida at a number of speaking engagements and interviewing him in his home, the film eventually followed the father of Deconstruction to Robben Island. When they came to Mandela’s cell, Derrida displayed an incredulity of the old fashioned kind. “Eighteen years?” he asked.  The Parisian intellectual couldn’t quite believe it.

The film then records the end of a lecture that Derrida gave in Capetown. Derrida was talking about forgiveness, and he argued that ‘pure’ forgiveness (whatever that is) is “impossible.” The moderator was bringing the session to a close when there was a final anxious question by a young white South African woman. “We sit here as potential objects of forgiveness. We are all of us, you included, in a sense, guilty.… Don’t you think that it fulfills an ideological function, telling us  we should not repent, not ask for forgiveness because then we ruin ‘pure,’ ‘unconditional’ forgiveness.” It was clear that for this young woman, and for South Africa there must be forgiveness. Without forgiveness there is no way forward.

The philosopher seemed perplexed, undone, and replied about the seriousness of irony.

This isn’t the place for a full discussion of the religious turn in the writings of Jacques Derrida. But it is important to note that this woman deconstructed the deconstructionist. And no matter how clever or philosophically complex his deconstruction of ‘forgiveness’ was, this young woman was having none of it. Living in post-Apartheid South Africa, living with the shame and guilt of her pale complexion, living in the wake of a life of privilege afforded to her and not to her black and ‘coloured’ neighbours, she passionately insisted that without forgiveness there is no future. Sometimes, as Bono once said, you simply run out of all irony.

And so, as Calvinism bears the shame for legitimating Apartheid, Deconstruction demonstrates its vacuity, its emptiness, its impotence to rebuild a communal, societal, political, economic and personal life rooted in forgiveness.

But Mandela taught us about the necessity of subverting the state when it oppresses its people. Of breaking laws that are there for the protection of racial privilege. And he taught us forgiveness. He modeled what a revolution rooted in forgiveness looked like. And without that, there is no healing of the past and no possibility of a future.

4 Responses to “Mandela, Calvinism and Derrida”