I’ve been wrestling with this all weekend – sometimes crying, sometimes praying. All I keep thinking about is how much he looks like my brother – my sweet, intelligent, amazing brother. I keep thinking that it was society’s job to protect Trayvon. That it shouldn’t have been a dangerous situation for him to be where he was that night. Society failed him. And not only that, in the aftermath, it dissected and destroyed what was left of him – his memory, his character, his denied future – with a viciousness that I could never imagine I’d see in 2013.  I’ve been trying to sort out why this has affected me so deeply – I am keenly aware that racism still exists, why should this latest instance trouble me? 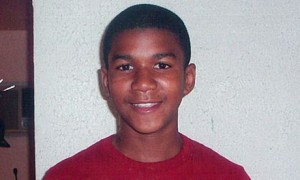 So let me tell you a little bit of my story as a Canadian of African descent.

We didn’t have the “you’ve got to work twice as hard, run twice as fast” rule in our home. My mom talked to us about it, but she thought that it put too much pressure on individuals; that it was too easy to become resentful – of how we were born and of how society historically (and currently) treats people of colour. We were always taught to be ourselves, to the fullest, regardless of what society told us we could and could not do. We were taught to be fearless; to laugh at people who questioned our abilities because of our race and gender. We were taught that we should never, ever allow anyone other than God himself to make us question ourselves; to stand up and make our voices heard when people slighted us.

I’ve striven to do this in my life, regardless of how people react. “You’re so sensitive!” “It’s just a joke.” “Stop playing the race card.” “I’m just stating facts.”

I’ve been called a feminazi, an “oreo” (white on the inside; black on the outside), a bitch, a nigger bitch, a militant, a ho. I’ve been told that black is ugly, stupid, violent, evil, less-than. I’ve been propositioned and grabbed and followed and harassed and humiliated by people who think they know me because of what they see, who feel entitled to an opinion of me, entitled to work out their own racial prejudices through me, entitled to touch me, to possess me, to dominate me.

It hurts every single time. Every single instance, big or small. Each time I would call home to my strong, beautiful, amazing mother. And she would say:

“Jess, you just keep doing you. These people aren’t worth your time. You know who you are, don’t let them take that away from you. They don’t deserve it. I am proud of you, you’re an amazing young woman. Good people will see you for who you are and honour that.”

I’d take those words in, I’d hold onto them, and then I’d look around, try to find some small example of society being better. A black woman featured on a mainstream magazine cover. Happy, interracial couples, strolling down the sidewalk on a summer afternoon in the city. A new black face in one of my predominantly White graduate courses. A funny joke from one of my Jamaican friends told me.

I feel so broken over it.

And the pain just multiplies – first with the unnecessary intrusion of Trayvon’s body for narcotics, then with the denial of charges initially, and then, with the media. Political pundits, commentators, casual observers – Christians, neighbours, classmates, friends. They just attacked. All this hatred and ignorance came pouring out. It is sickening and terrifying.

The world suddenly looks much, much more ominous.

There’s a spirit-crushing dread that haunts us with this new unknown: We don’t know who these vigilantes for justice are. They could be anybody; disguised as your neighbourhood watchmen or your local city councillor or your teacher. We don’t see or hear from them in ‘polite circles’ until some tragic moment, and it’s hard to know if the moment changed them – like an illness that ravages the body – or if they were monstrous all along.

I keep hearing about people who ‘unfriended’ friends on Facebook after the verdict came out. Why? Because the comments. The awful, cruel comments:

“Well, Zimmerman wants to be a lawyer now and good for him. What was Trayvon ever going to do with his life?”

“If Trayvon’s father had given him a curfew, this would never have happened.”

“He should have known not to wear a hoodie.”

On and on, deeper into the vortex of cold irony. How can we feel safe? What ‘small moment’ can calm this storm? I am trying to find it right now, I really am. I’m searching very hard. But I feel unsafe.

Jim Wallis’s “Lament of a White Father” has it right when he talks about hearing, listening, recognizing the pain of others, as a way to affirm them and their experiences. The counter-responses to this verdict – the peaceful protests, the reflective editorials – are important.

But I don’t feel the same hope yet that I have in the past, after a particularly dreadful encounter. I feel, as crazy as it sounds, betrayed. I feel like so many people in the black community have worked and waited and accepted less-than, throughout history and still today, and they deserved to be recognized, heard and acknowledged.

Their pain, our pain, deserved to be honoured in this tragic moment, this perfect, terrible manifestation of every black family’s deepest fear. But they looked in our faces and said: “You’re too sensitive. You’re overreacting. Stop playing the race-card. We’re just stating the facts.”

I don’t know how to respond to that anymore. I feel like I’ve spent my life giving measured, reasoned responses to these kinds of individuals. I now feel like I was shouting into the wind. Maybe this moment has changed me, changed many. Because in all honesty, I don’t know what to do now. When I first called my mother after Trayvon was shot, she said simply: “I can’t talk about this. It’s too much. It’s too close.”

That’s it. That’s the messy, emotional big and the simple, abrupt small of it.

An American activist in Latin America during the eighties was asked why he risked everything to record and release documents to the international community chronicling the violent human rights abuses of both the government regime and private corporations. He explained why he did what he did by saying that he felt a responsibility to “bear witness to injustice.”

I truly hope that people of all races stand up and bear witness, refuse to look away. I think as Christians it’s what we’re called to do, even in times when there is nothing else to be ‘done.’ Recognize it, hear it, listen to it.

I don’t know why it is that questions of race and privilege enrage people. I don’t know why this hell-bent determination to prove that these things don’t exist – that we haven’t done anything wrong – has such a stronghold. I care less every day.

Because whatever the philosophical or theoretical explanations are, it doesn’t change the fact that it’s real. It is real. Real. Real.

Are there deep problems with the Black community? Yes.

Do we in the Black community have work to do? Yes.

But is Trayvon Martin dead? Yes. This is real. Witness this.

14 Responses to “Trayvon Martin and Bearing Witness to Injustice”