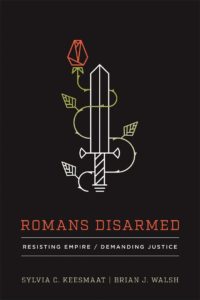 Globalization. Homelessness. Ecological and economic crisis. Conflicts over sexuality. Violence. These crisis-level issues may seem unique to our times, but Paul’s Letter to the Romans has something to say to all of them.

Following their successful Colossians Remixed, Sylvia Keesmaat and Brian Walsh unpack the meaning of Romans for its original context and for today. The authors demonstrate how Romans disarms the political, economic, and cultural power of the Roman Empire and how this ancient letter offers hope in today’s crisis-laden world.

Romans Disarmed helps readers enter the world of ancient Rome and see how Paul’s most radical letter transforms the lives of the marginalized then and now. Intentionally avoiding abstract debates about Paul’s theology, Keesmaat and Walsh move back and forth between the present and the past as they explore themes of home, economic justice, creation care, the violence of the state, sexuality, and Indigenous reconciliation. They show how Romans engages with the lived reality of those who suffer from injustice, both in the first century and in the midst of our own imperial realities.

Study Guide for Individuals and Groups

Study Groups
(Do you have a group studying the book? Let us know and we’ll post it here.)

Church of the Redeemer, Toronto

The good folks at Redeemer have chosen Romans Disarmed for their 2019 Summer Reading group. They are open to anyone who is interested. Brian and Sylvia will join the community on the evening of Thursday, June 20 at 6.30 to kick off the summer reads program.

The Bible for Normal People Podcast: Resisting Empire in the Book of Romans
Sylvia and Brian in conversation with Pete Enns and Jared Byas.

Resisting Empire
Sylvia and Brian on the Gravity Leadership Podcast

Empire, Justice and Romans
Brian and Sylvia on the Can I Say this in Church Podcast

Romans Disarmed named “Biblical Studies Book of the Year” by Hearts and Minds Books.
(It is a long list and you’ll have to scroll down towards the end for this notice.)

This new book, bravely published by Brazos Press, is a very socially-potent, painfully relevant, righteous application of the social ethic of Paul’s long letter to the Romans, in which the authors call us to a counter-cultural politics of Jesus by way of studying the ways the marginalized and powerful alike would have heard Paul’s famous epistle situated, as it was, in the midst of truly awful Roman imperial idolatry. That is, they offer us a very creatively-written, super-engaging, and well-informed study of the socio-cultural-political habits of first century Rome and how that context helps us properly appreciate the revolutionary vision behind Paul’s anti-imperial social ethic.

Building on recent scholarship, Keesmaat and Walsh engage Paul’s ancient letter to early followers of Jesus laboring under the shadow of empire in a way that brings it alive for similarly struggling North American Christians. They employ three groundbreaking approaches: a robust analogical imagination grounded in their experiences with marginalized people in Ontario, invented interlocutors who periodically interrupt the argument to ask why we should transgress Protestant orthodoxies about how to read the letter, and—most uniquely—humanizing portraits of fictional members of the first Roman church, made plausible by keen historical literacy.

All of this frees Paul’s liberating text from its captivity to dogmatic and pietistic formularies, restoring Romans to its sociohistorical context while revealing its disturbing parallels to our own. This Paul challenges us to reckon with how the wages of sin—such as our addiction to fossil fuels—are death (Rom. 6–8) and invites us to reroot ourselves in the deep theological soil of a people’s salvation story (Rom. 1–5, 9–11), in order that we might more courageously resist empire by practicing radical hospitality, love of enemies, and solidarity with the weak (Rom. 12–15).

I am deeply grateful for Keesmaat and Walsh’s committed and brilliant study, and I pray that it will, like Barth’s work, inspire a desperately needed theological and practical turning.

I thoroughly recommend this book. It brings the text alive and makes me hungry to read the Bible again. It makes the Bible relevant to my everyday life and to the challenges I feel in the wake of our recent election in which issues such as climate change, economic inequality, refugees and religious freedom were front and centre. It is a book for those who want the Bible to challenge and inform their day-to-day discipleship and to help them find a faith that is meaningful in today’s world. It is a gift to those frustrated with a faith that seems divorced from life and I want to thank Sylvia Keesmaat and Brian Walsh profusely.

Make no mistake. The book is a challenge to read. This is not because it is hard to understand—again, Keesmaat and Walsh are master teachers, and they are always lucid. Instead, it is a challenge because it dares to let Paul speak anew, and directly to the circumstances of the neoliberal constructions that have captivated our bodies and imaginations. Abject pieties are continually punctured, and assumed idols toppled right and left. Not least, the authors call us to a more faithful and demanding discipleship, one that, as they vulnerably display, they have undertaken in their own lives. You will likely want to argue with them at (many?) points. That is to be expected, allowed, honored. What they want most of all is for us to again really and more completely listen to Paul, to be vitally engaged by *his* arguments, to let Scripture be authoritative in all our lives.

Click here for more …
Note from Brian and Sylvia: Rodney was the editor who first signed us to write this book for Brazos. We are deeply grateful to our friend for the support and encouragement he gave to this project from the beginning.

Brian Walsh and Sylvia Keesmaat have managed to roll together imaginative story-telling, poetic targums, an “actor/lector” style of Q&A unpacking of their ideas, and a whole lot of extensive research to produce a book that will have you set aside many of your assumptions about Paul’s project. With its subtitle of “Resisting Empire, Demanding Justice,” the heart of this book is an insistence that this is precisely what Paul was calling the Christian community in Rome to do. Not as sword-wielding revolutionaries, mind you, but as followers of Christ living out the reign of God in the present and against all evidence to the contrary. Put it on your list!

I love engaging with the work of biblical scholars, but some scholarly books are so dry I can’t get through them. No such problem with Keesmaat and Walsh’s work. They use a variety of styles to make their points, and it always gets back to real-world applications. What does this mean for responding to the genocide of Indigenous peoples in Canada? To climate change? To LGBTQI rights? They never allow their scholarship to remain as scholarship for scholarship’s sake, because the questions the world is facing are too big and too urgent for that. “Application” isn’t just limited to the last chapter. It is relentlessly applicable, and they write only what they are also seeking, daily, to live into more fully. 100% recommend!

Every once in a while, a book comes along that challenges the way that we read the Bible. In some instances, the change could be in how we read the cultural context surrounding the book, like EP Sanders and James Dunn challenged us to do in the 70’s. Some offer new angles on books, like NT Wright and Scot McKnight have done with Philemon. And, in some cases, we are asked to consider current hot-button issues through the lens of the text, which is where Romans Disarmed comes in.

Authors Sylvia and Keesmaat and Brian Walsh challenge what we know about Romans, asking us to consider new angles on the text. These new angles? They are wide ranging, varying from Pauline challenges to Empire, ecological theology, and economic ideologies. Most students or readers familiar with Romans won’t see this – I certainly didn’t from the start.
Click here for more …

The authors want Romans Disarmed to equip followers of Jesus Christ for the blessed work of loving others, not saying they do but doing the hard work of taking care of  God’s world, of bringing people in not keeping people out, of creating love fests and not constructing fortresses.
Click here for more …

David Westfall, “Recipes, Imagination and Scripture: A Review of Romans Disarmed,” In All Things

The task that faces the church today, according to Keesmaat and Walsh, is to answer Paul’s summons to resist the forces of empire in a new context by embracing the same communal ethic of subversive homemaking.

Not unlike the early Christian community in Rome to whom Paul’s letter is addressed. Romans Disarmed is an interpretation of scripture from the margins. Class, economy, gender, ecology – all fall under the scope of this inspired and creative analysis.

Keesmaat and Walsh are brilliant storytellers. They invite the reader into the lives of people in their community, and reading Romans Disarmed brings us right into the lives of “Iggy” and Iris, Nereus and Brian, displaced Judeans and displaced Indigenous peoples. Ancient and modern people’s stories cross and cross again, as the authors unfold the issues of empire, displacement, and oppression and explore the text of Romans for how it answers those issues.

The breadth of Keesmaat and Walsh’s familiarity with the text of Romans and of the entire Bible is deeply apparent, but at every point they bring the text into juxtaposition with the lives of their fictional ancient characters (Iris and Nereus) or the lives of their many modern examples. It is clear that for them the text is a living conversation partner that addresses the lived human experience.

Whether one agrees with their politics, Keesmaat and Walsh restore something of the urgency of Paul’s original letter, reminding us that it was not intended to be a dry theological treatise spawning endless soteriological debates but a call to enact “the justice of God which is revealed by faith” and a promise that in the midst of our mess God is making us a home.

Keesmaat and Walsh’s work is rare among academic books in that it is practical, passionate, personal, political, and provocative. With their use of an interlocutor, fiction, poetry, contemporary reflection and Targum translations, Romans Disarmed is undoubtedly the most engaging Biblical studies book I have ever read.

I found this a thought–provoking and stimulating reading of Romans. Readers who want to be challenged by and apply Paul’s message to our contemporary world will be rewarded by a book that offers a fresh, dynamic perspective.

While rigorously academic and heavily researched, the authors manage to infuse creativity and imagination throughout. From the outset they acknowledge that they are not setting out to redefine the meaning of Romans once and for all, but offer a challenging and discomforting perspective of how we might understand Paul’s message of Romans today. Interjecting a fictional narrative throughout helps keep the historical context of the book in front of the reader consistently. The authors delve into nearly every controversial social issue of the day which is sure to challenge every reader – but challenge in a pertinent way.